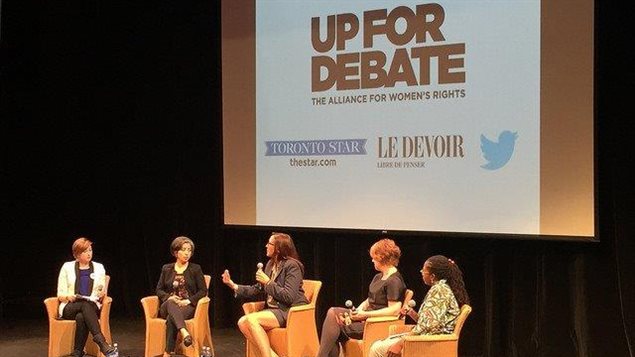 Women’s groups seek to unite on some issues

Canada no longer has one national women’s group, but many diverse groups are looking for ways to unite on particular issues. The National Action Committee on the Status of Women was founded in 1972 and operated for 30 years. But it suffered budget cuts by successive governments and divers groups chose to pursue their own particular interests.

Although many women’s groups act independently there are times when they come together and take action. Such was the case during Canada’s federal election campaign in the months leading up to the October 2015 election.

United fight for a leaders’ debate

About 25 groups got involved in organizing “Up For Debate,” an campaign to bring attention women’s issues.  “It’s important to have unity insofar as it can show the strength of a diversity of people who are organizing and speaking together,” says Kelly Bowden, director of policy and campaigns at Oxfam Canada.

“I think the concept of one voice is strong insofar as it recognizes the various intersections and the diversity of voices that are within that unity.”

Diversity but some unity of purpose

In another example of the power of unity, a coalition was formed in 2015 to develop a national action plan to deal with violence against women and girls.

Groups are diverse but there are issues they can agree on, says Bowden. “Being a feminist today means that you believe in equal economic, social and political rights for men and women. I think that whether you’re fighting for that in terms of equal pay or …in terms of labour rights or…women’s representation in Parliament, the fact that we’re still fighting to bring that equality forward, that’s a clear commonality that we all have.”