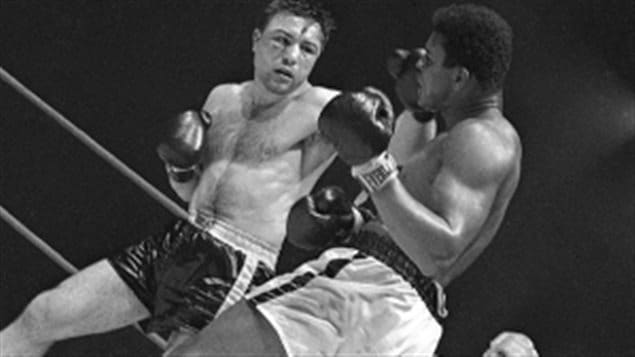 At the last moment Chuvalo hammers Ali, but it was not enough for the win.
Photo Credit: Associated Press

In 1966, one of the world’s greatest boxers, World heavyweight champ Muhammed Ali was as skilled a showman outside the ring and he was as a boxer inside, and controversial in all regards.

But although the champion, city mayors across the US refused to sanction his matches as he had recently joined in with the Nation of Islam, changed his name from Clay to Ali, and refused the US military draft. This angered many Americans and without permission to fight in the US, his matches had to be fought outside the country.

On this date, he was set to fight Canadian George Chuvalo in Toronto.

Chuvalo was the Canadian heavyweight champion, but although known in Canada,  probably elsewhere he was an unknown outside the fight business. American promoters and bookies gave the underdog Chuvalo, little chance. But, those who knew him and had seen him fight knew he never retreated, never backed down, and that this would be an epic event.

Ali had seen Chuvalo pound the daylights out of the number 6 ranked fighter in an earlier  match in Louisville, and although the champion was supposed to fight the winner, decided he would rather not face Chuvalo and so backed out.

Originally Ali was to fight against then WBA champ Ernie Terrell in Chicgo, but the city wouldn’t agree.  Tentatively moved to Montreal and later Toronto, Terrell backed out. Desperate, the promoters contacted local fighter, George Chuvalo who had only two weeks to prepare for a world heavyweight match, something unheard of.

As Toronto’s hometown hero, having been denied his earlier chance at Ali, in spite of the absurdly short prep time, the fact it was not billed as the title match, and that Chuvalo was now past his prime, he accepted the challenge.

The fight began with the lightning fast Ali scoring hit after hit.  But unbelievably for those who had never seen him, Chuvalo didn’t go down, not in the first,  not the fifth, the tenth, the 13th, or the 14th, and he never backed up.

Ali was far ahead on points, but obviously concerned that nothing he had done was stopping Chuvalo.

In the 15th he was back again, with the two seemingly exhausted but still hitting.

Suddenly Chuvalo seemed to realize he could only win with a knockout, and he only had a minute left to do it.

The huge crowd at the Maple Leaf Gardens leapt to its feet. It was an electrifying moment.

The champ staggered, shocked and dazed but didn’t go down and was still standing at the bell and was declared the winner on points, retaining his title.

After ward though, Ali was taken to hospital where he spent the night, Chuvalo went out dancing with his wife.

Ali would later admit that the Canadian was the toughest fighter he ever had to face.

Fifty years later it remains among the greatest of boxing matches, and the biggest one staged in Canada.