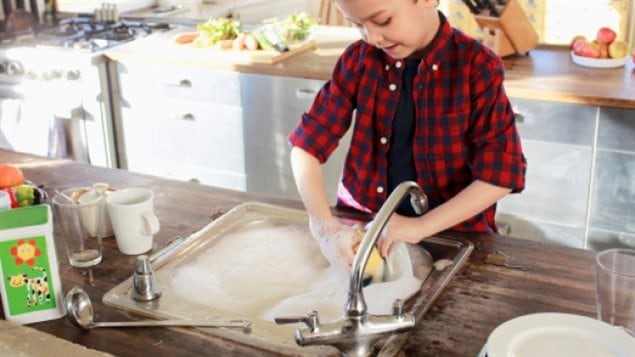 Studies show assigning chores at an early age has benefits thoughout life for the individual. Chores sohuld not be gender specific either.
Photo Credit: Getty Images via CBC

A new survey indicates something that many people have seen in their own lives; children today are doing fewer chores around the house.

The survey taken earlier this year asked the opinions of over 1,700 Canadian adults and was commissioned by Whirlpool Canada.

Develop indedependence, and interaction with others

Some 59 percent said that kids today do less housework than when they were young. Yet most-69 percent- say when chidren have a positive attitude toward household chores they develop increased independence, while 57 percent said it improves a child’s ability to work well with others.

This survey echoes results of other studies such as in the US where in 2002, a longitudinal study by professor emeritus Marty Rossman showed that children who were given chores starting at a young age tended to be more self sufficient and have greater academic and career success than those given chores as teens or not at all.

Therapist and parenting expert Alyson Schafer says, “Too often children are excused from helping, or treated like indentured servants who resist being ordered around”.  She says that instead parents “need to invite them to help and participate in the jobs needed to keep the home running smoothly. It’s these contributions and helpfulness that make children feel valued, feel a part of the family, and build life skills for when they set up their own home”.

Other results of this latest Canadian survey include:

CentralMaine-2014-kids growing up without chores