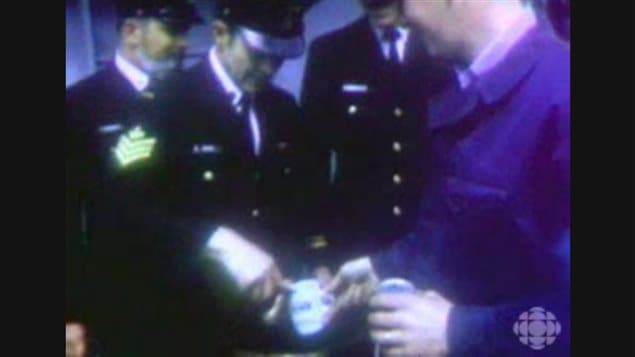 CBC film of the last day of rum issue in the Canadian navy, here a sailor recieves his 2.5 ounces aboard a Canadian ship on March 30, 1972
Photo Credit: CBC

Since it’s earliest days, the Royal Navy supplied alcohol to its sailors.

Originally it was a gallon of beer per day, beer preserving better than plain water on voyages.

However, this took up a lot of room on board. As RN ships travelled longer distances during which even beer went bad, in the mid 17th century the British Navy switched to wine or a half pint of spirit. The spirit was often brandy at first but later after the capture of Jamaica in the mid 1600’s, rum began to replace brandy.

This rum was later diluted with water to reduce concerns of drunkenness, and the diluted liquor soon became known as “grog” (see below).

Years later this the ration was further reduced and diluted still more.

However, the bosun’s piping of “up spirits” continued as a tradition, and later adopted in commonwealth navies.

The Royal Australian Navy had ended their rum tot tradition much earlier in 1921, while the Royal New Zealand Navy continued until February 27, 1990.

Where the name Grog comes from.

It was British Admiral  Edward Vernon who in 1740, ordered the first watering down of the rum ration. He was known as “Old Grog” because of the rough cloth coat he continually wore made of a material called “grogham”.

The watered rum he created soon took on the name “grog”.