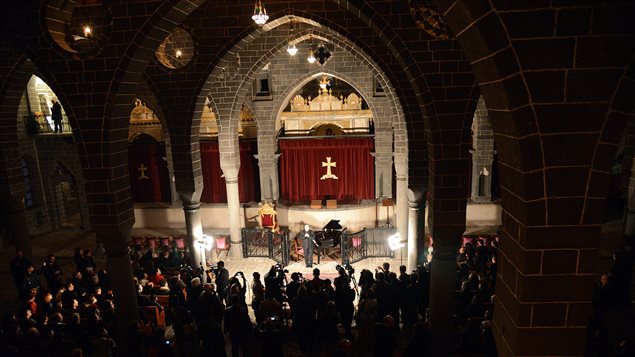 Raffi Bedrosyan is a man on a mission.

The Toronto-based civil engineer and pianist is gearing up for a fight to restore the ownership of St. Giragos Armenian church in the city of Diyarbakir, southeastern Turkey, after it was expropriated by the Turkish government last week along with other properties in the city’s historic Sur district.

Over the last few months, Sur has been the scene of heavy fighting between Kurdish militants affiliated with the PKK, which is considered a terrorist organization by Turkey and several other countries, including Canada, and Turkish security forces backed by armour and air power.

The fighting has destroyed or damaged large parts of the historic district. And under the pretext that it needs to repair and protect these historic structures the government in Ankara decided to expropriate large swaths of the old city, including the St. Giragos church, which had sustained only minor damage, “a few broken windows and bullet holes in the walls,” Bedrosyan said.

(click to listen to the full interview with Raffi Bedrosyan)

Bedrosyan, who was born in Turkey to Armenian parents, has a very personal connection to the church.

“St. Giragos church in Diyarbakir, or Dikranagert, the Armenian word of the city, is the largest Armenian church in the Middle East,” said Bedrosyan speaking from his office in Toronto. “It dates back to the 14th century and with several expansions it served the large Armenian community of 100,000 in Diyarbakir until 1915.”

Then, as the Armenian population of the city was wiped out during the 1915 Armenian genocide, the church was also destroyed, Bedrosyan said.

The bell tower was taken down for being higher than neighbouring mosque minarets and the rest of the church fell into disrepair and collapsed by early 2000s, he said.

A few years ago, Bedrosyan joined a group of fellow Armenians, who formed a charitable foundation to restore the church to its original glory.

“With worldwide fundraising from Diaspora Armenians, as well as from Istanbul Armenians, the church was reconstructed in 2011,” Bedrosyan said.

Last year, Bedrosyan performed a concert in the packed church to mark the 100th anniversary of the genocide, which Turkey officially refuses to recognize.

More than a place of worship

In the short time since its restoration St. Giragos had become a spiritual centre, drawing Armenian pilgrims from all over the world, as well as a cultural centre for the remnants of the Armenian community in Diyarbakir, and a genocide memorial, a monumental reminder of the city’s once thriving Armenian community, Bedrosyan said.

“But more significantly it has become a meeting place for the “hidden,” Islamicised Armenians in the region who are the grandchildren of the forcefully Islamicised Armenian orphans from 1915,” Bedrosyan said. “Thanks to this church they showed the courage to research and find their Armenian roots again; quite a few of them got baptised in this church and started taking Armenian classes, which we had organized.”

Many of these people are now very frustrated and angry, Bedrosyan said.

“People are shocked right now, plus they just survived almost like a civil war,” Bedrosyan said. “There are several people without a place to live any more, they are thrown out from their apartments and houses, which are now burned down and bombed out, but this church expropriation is like the last straw.”

Bedrosyan says he is trying to find out what legal means there are to contest the legislation in courts. There is work to be done within Turkey through the lawyers of the Armenian Patriarchate of Istanbul, which along with the charitable foundation owns the church and a few other properties that were confiscated along with it, Bedrosyan said.

Outside Turkey, Berdosyan and his associates are consulting lawyers to launch lawsuits against the Turkish government.

“I was instrumental in fundraising from Diaspora Armenians and in almost every country: the U.S., Canada, most of the EU countries there are Armenians who donated money towards this reconstruction and now all these people are completely upset and shocked, and all that work, and money, and efforts are now gone to waste by this legalized robbery,” Bedrosyan said.

Armenian organizations in Canada and the United States are lobbying their respective governments up to the level of President Barak Obama to get involved in this issue, Bedrosyan said.

“And the American embassy in Turkey is very closely following this case,” Bedrosyan said. “Everybody is waiting for some sort of explanation and basis for this decision by the Turkish parliament.”

Bedrosyan said he has also contacted the Turkish embassy in Ottawa to get some explanation.

“They have so far not provided any explanation other than referring me to announcements by certain members of parliament whose explanations are quite childish,” Bedrosyan said.

Contacted to comment on the expropriation on Friday, Turkey’s ambassador in Canada Selçuk Unal said his government has pledged at the highest level to restore all the properties that can be repaired and build new housing where buildings have been damaged beyond repair.

“But for that they need to expropriate a couple of buildings, maybe more than that, so there will be new buildings to be built in the vicinity and (they) will be returned to the persons who have owned the original places,” Unal said.

“In order to replace a few windows, which were broken in this church, you don’t need to expropriate the church,” Bedrosyan said.

There have also been assurances by a local MP from the governing  AKP party of President Recep Tayyip Erdogan, Turkey’s minister of culture who visited Diyarbakir with two other cabinet ministers on Thursday that there will be no expropriations of churches or mosques, Unal said.

“And today the prime minister (Ahmet Davutoğlu) was visiting Diyarbakir province,” Unal said. “He made a public speech, assuring everybody that whatever is destroyed will be restored within a new property development package and he also stressed that property rights and tittles will be strictly upheld during any possible reconstruction efforts.”

Despite all these assurances, the fact remains that the St. Giragos church along with a couple of other properties belonging to the church, are on the official list of expropriated properties published by the government, Bedrosyan said.

And if political pressure to stop the expropriation within and outside Turkey doesn’t work, he and his supporters are ready for a lengthy legal battle, Bedrosyan said.

“This act is against human rights, the property rights or every other right that I can think of, which is supposedly safeguarded by the Turkish constitution, EU laws that Turkey is bound by, so there will be lengthy lawsuits.”