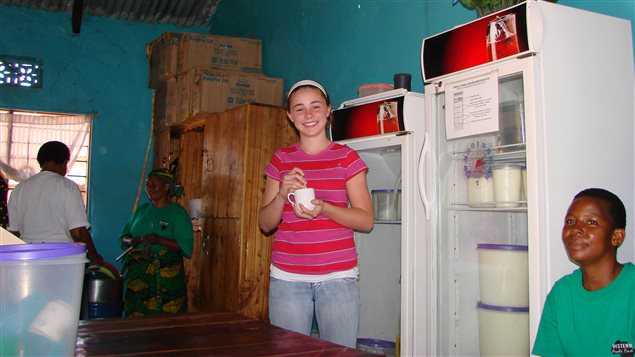 Jennifer Reid (centre) helped in the first kitchen set up in Tanzania to make the yogurt using the special probiotic strain donated by her father.
Photo Credit: Courtesy Gregor Reid

A researcher at Canada’s Western University donated a strain of probiotics which is permitting Africans to make a much healthier yogurt. Gregor Reid is a foremost expert on these bacteria which have now been freeze-dried to deliver in easy-to-use one-gram sachets.

One sachet can make 100 litres of yogurt

Each sachet can be added to pasteurized milk to make 100 litres of yogurt which can then be eaten or sold. The probiotic yogurt contains more nutrients than regular milk. While probiotic yogurt has become popular in western countries it has not yet caught on in Africa.

Probiotics have many benefits

“This is very unfortunate because probiotics can help, for example, reduce the duration of diarrhea, help with issues of malnutrition and infection… in African countries—sub-Saharan Africa where a lot of children are dying and adults as well from diseases that we would see as certainly treatable in our part of the world,” says Gregor Reid a scientist and professor at Western University.

Kitchens have already been set up in Uganda to produce the sachets and to teach people how to use them, and several more are planned for that country, Kenya and Tanzania. These are countries when dairy milk is available.

The program received a $1.45 million grant from the Canadian International Food Security Research Fund. The fund works to improve food security around the world and is funded by the Canadian government.

Project has resulted in ‘incredible empowerment’

“At the end of the day, it’s the local people that make this work, not us,” says Reid. “We’ve been really impressed by the incredible empowerment that local mothers and groups have found. They believe in it. So it’s really grassroots.”