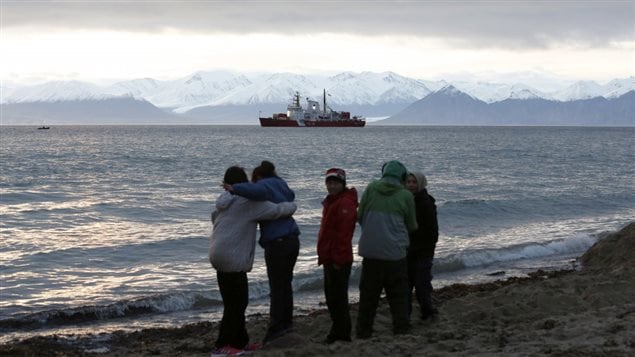 Local children stand on the shore as the Coast Guard ship Des Groseilliers sits in the waters near the Arctic community of Pond Inlet, Nunavut August 23, 2014.
Photo Credit: Chris Wattie/REUTERS

Canada, France, Norway and Sweden express support for ban on heavy fuel oil in the Arctic

A coalition of environmental groups campaigning to ban the use of heavy fuel oil in Arctic waters, has received “vocal support” from at least three circumpolar countries, says a campaigner with World Wildlife Fund Canada.

Speaking from London where he attended a plenary session of the International Maritime Organization (IMO), which wrapped up on Friday, Andrew Dumbrille, senior specialist in sustainable shipping at WWF Canada, said the information paper presented by the coalition of NGOs, outlining the spill risk and emission impact associated with the use of heavy fuel oil (HFO), received “vocal support from a few countries who agreed on the need for future study and analysis.”

“France, Norway, Sweden and Canada all spoke positively,” said Dumbrille. “Russia didn’t and had a critique about the toxicity between light and heavy fuels. In IMO terms this is a success for us in putting the issue on the agenda and making space for future work within the committee.”

Members of the United Nations agency responsible for the safety and security of shipping and the prevention of marine pollution by ships had gathered in London, England, this week for the meeting of the Marine Environment Protection Committee (MEPC).

The coalition of NGOs will now start working with the countries that spoke up vocally to encourage them to submit an a collective paper for a proposal for a work plan to look at the issue of heavy fuel oils at the next MEPC meeting at the end of October, Dumbrille said.

“HFO is unique when it’s accidentally spilled into marine environment in that it emulsifies on the ocean surface,” Dumbrille said. “And that emulsification is like a mayonnaise, which stays on the surface for many days, weeks, some people say months, and is extremely difficult to clean up.”

Marine animals that frequent the surface are especially at risk because this emulsified mayonnaise sticks to their furs and feathers, causing hypothermia and death, Dumbrille said.

“On the emission side, the HFO by far of any other fuels produces the most soot, the most black carbon, the most particulate matter, the most nitric  oxide, the most sulfur oxide of any fuel,” Dumbrille said. “That’s harmful to human health. When this black soot is on the surface of snow, it decreases the ability of that snow to reflect heat and when more heat is absorbed, more melting occurs, more climate change occurs.”

The IMO has enacted a ban on heavy fuel oil use in the Antarctic waters, which comes into effect in 2016.

However, while Russia agreed to the Antarctic ban it is not keen on reproducing the ban in the Arctic, where it relies on heavy fuel oils not only in shipping, but also for heating in its northern communities.

Russian officials at the MPEC meeting in London objected to the proposed study of the harmful effects of heavy fuel oil in the marine environment, arguing that the alternatives such as diesel are no less toxic.

“It was an interesting intervention in that way because ultimately what we are asking for is switching away from these types of fuels – like heavy fuel oil or diesel – to something even less toxic like LNG (liquefied natural gas),” Dumbrille said. “In that respect it may have seen as a criticism, but a lot of NGOs were nodding in agreement.”

Studies indicate about 75 per cent of ships in the Arctic waters use heavy fuel oil, Dumbrille said.

“It’s a traditional fuel that is by and large much cheaper than the alternatives of diesel or LNG (liquefied natural gas),” Dumbrille said. “And the supply of HFO is also global and it’s readily available, so it’s mainly an economic issue.”