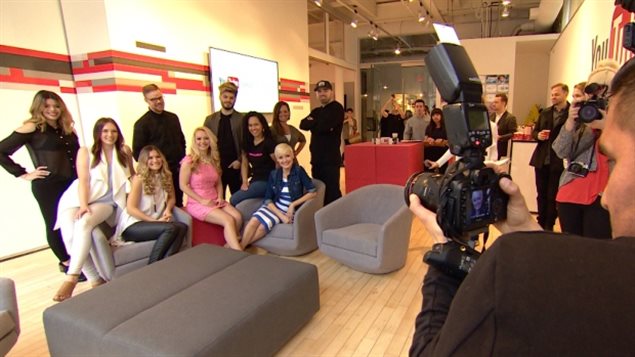 YouTube has come to Canada, with its YouTube Space in Toronto. Described as a ‘creative industry incubator’ the state-of-the-art facility is part of George Brown College.

Part of the college’s Centre for Arts, Design and Information Technology, the studio will offer training, networking and production experience for those wanting to create content for the YouTube’s audience of one billion people around the world.

This is the ninth YouTube Space opened, with studios now in London, New York, and Los Angeles as well as Tokyo, Sao Paulo, Paris, Berlin and Mumbai.

“We want to stay here… we do not want to leave”

Toronto’s space is 3500 square feet with a professional studio, camera equipment that includes 360 and virtual reality cameras, lights, a sound stage and sets. There’s also a bar area, and a concert stage, and a cozy nook that features moose antlers and old snowshoes as authentic Canadian decor!

Some major YouTube sensations produce in the Greater Toronto Area. Fans will be waiting to see how Jus Reign might adapt. AndLilly Singh, aka Superwoman, might just be happy to settle down again in her hometown following her world tour.

Canada ranks third as the country with the most creators for YouTube, so it will be interesting to watch the evolution of YouTube talent and productions.

“There is an amazing amount of creator talent here that is disproportionate to the size of the Canadian market,” Laura Lee, YouTube’s global head of top creators, told CBC News in an interview last May.

ASAP Science, another Canadian YouTube success is the work of Gregory Brown and Mitchell Moffit. The duo have more 5 million subscribers. Currently they rent a loft space in Toronto to produce their show, but the YouTube space is available with no charge, for those with the required number of followers.

“We want to stay here, we’ve started to make our business here, and we do not want to leave. So the YouTube Space has now come here, so that we, as Canadian YouTubers can work together and thrive and realize that this city is so amazing that we don’t need to go anywhere else to be YouTubers who have international audiences.” Gregory Brown told CBC News.

Adam Relis is the head of New York’s YouTube studio. He was in Toronto for the opening yesterday. “Toronto has a really rich creative history and right now obviously some very popular pop-culture icons coming out of Toronto in Drake and The Weekend and it’s also a very vibrant YouTube creator community and so we wanted to come here and be in a place where really the market demanded it so that we could support and invest in those creators.” he explained to CBC News.

It’s worth remembering that YouTube is where Justin Beiber started.