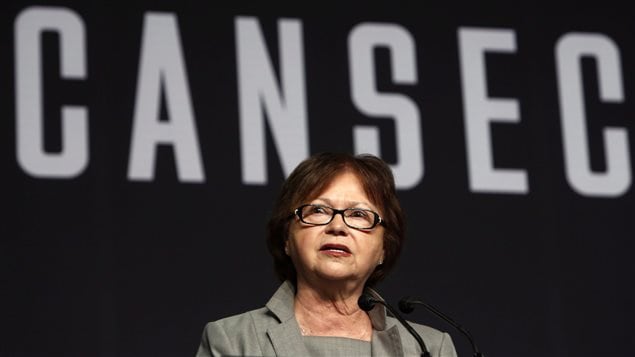 Judy Foote Minister of Public Works and Procurement addresses members of the defence and security industries at the CANSEC 2016 expo, Thursday, May 26, 2016, in Ottawa. THE CANADIAN PRESS/Fred Chartrand
Photo Credit: PC / FRED CHARTRAND

Ottawa has unveiled a series of measures designed to enhance the government’s ability to modernize and oversee its cumbersome military procurement process while it tries to rebuild its once mighty shipbuilding industry.

Minister of Public Services and Procurement Judy Foote announced the new measures during a lunch-time keynote address on Thursday to participants of CANSEC 2016, a major defence and security industry trade show organized by the Canadian Association of Defence and Security Industries (CADSI) in Ottawa.

“The National Shipbuilding Strategy is good for Canada, but it needs to be improved,” Foote told the audience of defence industry representatives and members of the military.

These improvements will be based on the lessons learned over the last five years since the strategy was launched by the previous Conservative government, Foote said.

“First we need to rebuild the expertise and oversight gap that arose over the decades in which Canada was largely out of the shipbuilding business,” Foot said. “Decision making has been largely ineffective because of years of inactivity in the shipbuilding industry, and more expert advice was needed to guide decision-makers.”

The government has already hired Steve Brunton, a retired Rear Admiral from the United Kingdom’s Royal Navy, to assist with the implementation and management of the strategy, Foote said.

Her department plans to double and maybe even triple the staff in its shipbuilding unit, as well as train more personnel to manage the various aspects of the shipbuilding strategy.

“Not only were Government shipbuilding teams too small, they also lacked sufficient expertise to deliver on such a complex, long-term endeavor,” Foote said.

The third area the government plans to improve is budgeting, she said.

“It makes no sense to establish a budget today for a project that will not start for years, even a decade,” Foote said.

The past practice of setting budgets with preliminary figures that were never updated to reflect refinements in requirements and plans, inflation, and changes in exchange rates and material costs, were the main reason why “projects appeared to be vastly over-budget when actual contracts were signed,” she said.

For this reason the government will not be announcing a new cost estimate for the Canadian Surface Combatant (CSC) program until it has signed a build contract, Foote said. The CSC project will renew the Royal Canadian Navy surface combat fleet by replacing its older Iroquois-class destroyers and the Halifax-class multi-role patrol frigates, the government said.

It is the largest and most complex shipbuilding initiative in Canada since World War II, according to the Department of National Defence.

“Economic conditions change, requirements and technologies evolve, and the government must be agile enough to review its financial commitments,” she said.

The government also plans to implement measures to track the performance of the shipyards and improve communication about the strategy’s successes and challenges, Foote said.

“Canadians deserve to know how their money is being invested and the impact it is having on our Navy and Coast Guard and our country’s economy,” Foot said.

The total value of contracts awarded to date for large vessels under the National Shipbuilding Strategy will contribute nearly $4.4 billion of gross domestic product and create or maintain up to 5,500 jobs per year between 2012 and 2022, she said.

The construction of ships for the Royal Canadian Navy and the Canadian Coast Guard is already underway. Canada’s first Arctic Offshore Patrol Vessel is being built at Irving Shipbuilding in Halifax, and the second one is scheduled for later this year.

Construction has started on the first two of three Offshore Fisheries Science Vessels at Seaspan’s Vancouver Shipyards, she said.