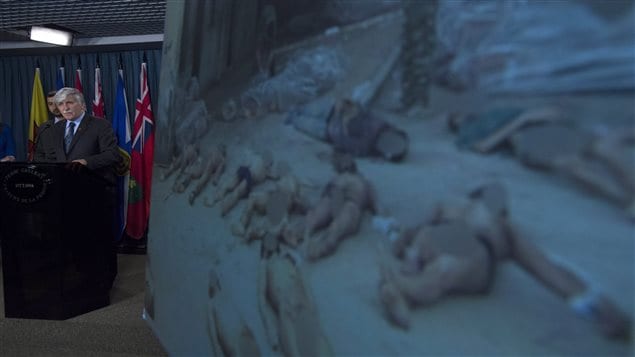 Retired Canadian general Romeo Dallaire says genocide on the scale of that in Rwanda is happening right now in Syria. Dallaire led the failed United Nations peacekeeping mission in Rwanda in 1994. Since then he has written books and campaigned relentlessly to prevent the horrors of conflict.

Dallaire was part of a delegation to Canada’s Parliament Hill that brought graphic photos of atrocities perpetrated in Syrian prisons by the regime.  The victims are civilians.

Dallaire says he has seen children recruited in Jordanian refugee camps to fight in the Syrian conflict, just as he saw child soldiers recruited for the Rwandan genocide.

He urges the world to strike a peace agreement with teeth to put an end to the Syrian civil war. In five years of conflict, millions have been displaced and hundreds of thousands have died.

More than 800,000 people were massacred in the Rwandan genocide. The United Nations failed to answer Dallaire’s pleas to stop the carnage. Upon his return, he suffered a breakdown about which he spoke openly.