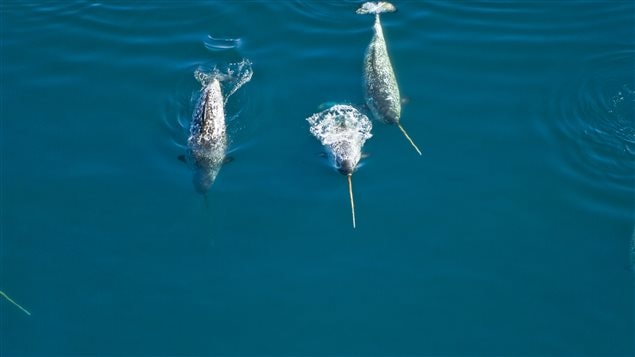 Lancaster Sound is home to 75 per cent of the world’s narwhal whales and the Canadian Arctic’s richest concentration of marine mammals.
Photo Credit: Mario Cyr

The surrender of exploration permits covering 8,625 square kilometres will facilitate the conservation of a massive, highly sensitive marine ecosystem at Lancaster Sound in the Canadian Arctic. Shell Canada voluntarily surrendered the permits to the Nature Conservancy of Canada, which in turn, released them to the government of Canada.

The area is one of the Arctic Ocean’s richest marine habitats and home to several species of whale, seals, walrus and polar bears. It is bordered by important seabird breeding colonies. Indigenous people have hunted and trapped in Lancaster Sound for generations and continue to do so.

Expanded park would be ‘globally significant’

“This is globally significant,” said John Lounds, president and CEO of the Nature Conservancy of Canada. “This is a huge area. If it is established at a 100,000-square-kilometre size it would represent almost two per cent of all of Canada’s marine territory.

A long haul, not over yet

Canada has pledged to protect five per cent of its marine territory by 2017 and 10 per cent by 2020. Lounds calls the promise ambitious but says the government could make substantial headway by expanding and protect the Lancaster Sound area.

First the federal government must negotiate with the government of the northern territory of Nunavut and the Inuit people who live there. Success would be the culmination of years of effort and disagreement among competing interests including governments, industry and conservation groups.