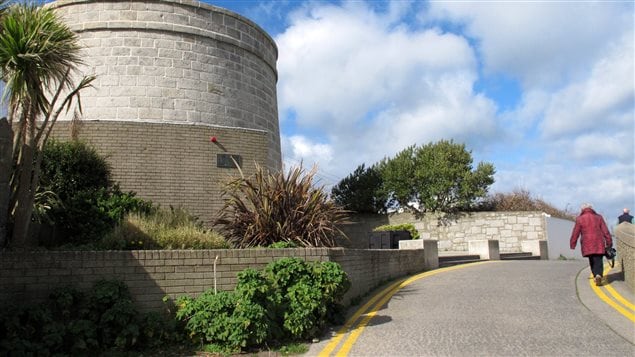 This March 17, 2014 photo shows the stone tower featured in the opening scene of Ulysses, which is now a James Joyce museum in Dublin, Ireland. The 19th century Martello tower was one of a series built along the coast to withstand an invasion by Napoleon. Joyce stayed here briefly and the gun platform, with its panoramic view of Dublin bay, as well as the living room are preserved as he described them in Ulysses. Many Joyce lovers begin the annual Bloomsday celebration with early morning readings from Ulysses atop the tower.
Photo Credit: AP Photo / Helen O’Neill

Bloomsday, June 16th, is the day James Joyce immortalized in his opus, ‘Ulysses’. The story of Leopold’s Bloom 1904 day in Dublin, it is patterned on the Odyssey.

In Dublin it’s now a major festival with celebrations taking place on many of the original sites. In Canada, the occasion is celebrated in various manners in several locations, but in Montreal it has taken root over the last few years, and become a five-day affair.

David Schurman is the president of the Festival Bloomsday Montreal. Along with his wife and partner, Judith, and a crew of committed volunteers, they have created a celebration of the words and wit of Joyce, and other Irish literary lions. This year there is a nod to Samuel Beckett.

From the academic gatherings that help to provide an insight into the peculiar genious that is Joyce, to the social and celebratory side of Irish culture, Montreal’s Bloomsday line-up has something for everyone.

In Toronto meanwhile, the activities will begin bright and early on June 16th with an event called ‘Bloom on the Beach(es)‘ at Kew Gardens in the city’s Beaches neighbourhood. Toronto’s celebration of the occasion has continued for 31 years.