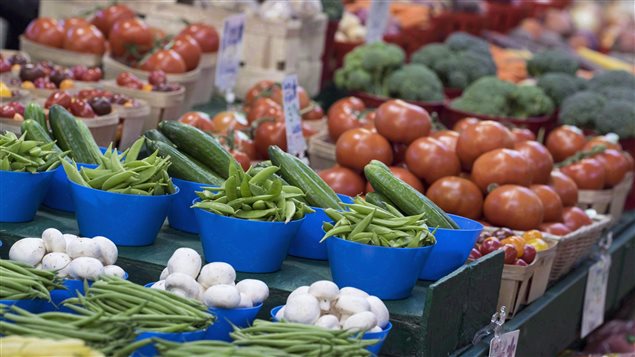 Vegetables on display at Montreal’s Jean Talon Market in January 2016 likely cost more than the year before, and people bought fewer of them.
Photo Credit: Paul Chiasson/Canadian Press

With a growing obesity epidemic in Canada, health authorities work hard to try to get Canadians to eat more fresh fruit and vegetables. But hefty price increases have had the opposite effect.

A recent study found that about one-quarter of people surveyed in May 2016 said they ate fewer fruits and vegetables over the last year. Those with lower incomes and lower education levels were more likely to have cut back.

Canada imports much of its fresh produce from the U.S. The steep drop in the value of the Canadian dollar as well as drought in California sent prices soaring.

Prices for fresh vegetables went up 11.7 per cent between April 2015 and April 2016, and fresh fruit prices were up 11 per cent during that time, according to government statistics.

Canadians adapted by buying fewer fresh fruit and vegetables. About 45 per cent considered buying or bought frozen produce. Some switched from fresh fruit to fruit juice, a move that dieticians would not recommend is a healthy choice.

Things are likely to get worse, thinks Lianne Foti, the study’s co-author and assistant professor in marketing and consumer studies at the University of Guelph. Do the result of the study surprise her? “When I think about nutrition and food security, yes, it does a little. It makes me think that we need to look at how we mitigate long-term risks here especially in a northern climate like ours.”