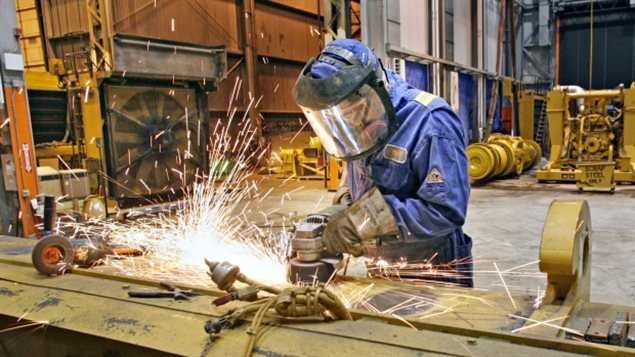 Lower skilled technical occupations in health, natural and applied sciences, as well as manufacturing and construction labourers and assemblers are most at risk of being affected by automation, says a new report.
Photo Credit: Norm Betts/Bloomberg

The rise of the machine is closer than you think.

Nearly 42 per cent of Canadian workers are at a high risk of being replaced by robots or have their jobs significantly changed in the next two decades, says a new report from the Brookfield Institute for Innovation + Entrepreneurship (BII+E) at Ryerson University in Toronto.

The report, released today, entitled The Talented Mr. Robot: The Impact of Automation on Canada’s Workforce looks into how automation and artificial intelligence are likely to affect the Canadian labour market over the next 10 to 20 years.

Creig Lamb, a policy adviser at the Brookfield Institute and the author of the report, said recent advances in artificial intelligence and robotics mean that automation, which until recently was confined to more routine tasks, is now entering the realm of cognitive, non-routine tasks and occupations, such as driving and conducting job interviews.

(click to listen to the full interview with Creig Lamb)

The most high-risk occupations are in office support and general administration, sales and services, transportation and distribution, lower skilled technical occupations in health, natural and applied sciences, as well as manufacturing and construction labourers and assemblers, says the report.

However, there will likely be major job task restructuring in the near future, he said. 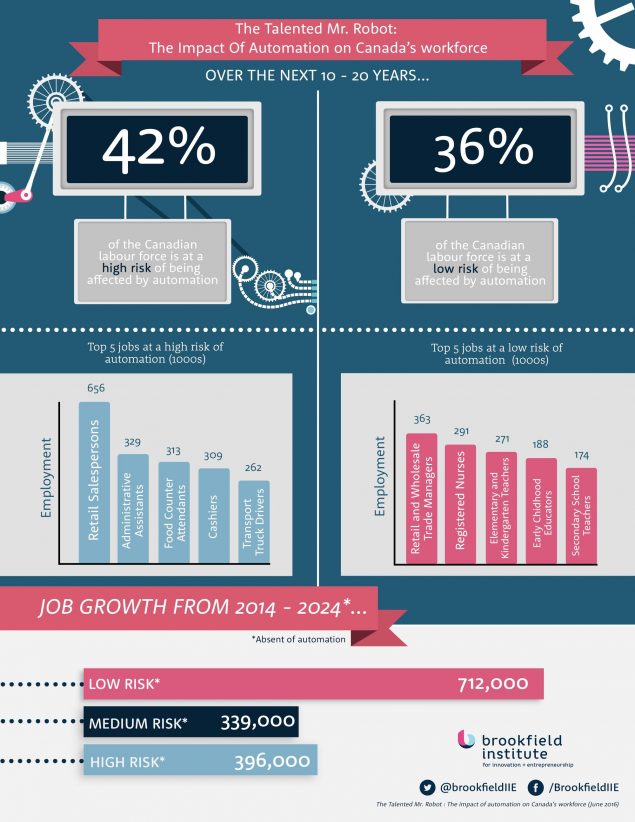 Infographic details highlights of The Talented Mr. Robot: The Impact of Automation on Canada’s Workforce, a new report by the Brookfield Institute for Innovation + Entrepreneurship (CNW Group/Ryerson University)

Occupations that have a low risk of being affected by automation range from the arts, culture, recreation and sport, management and supervisory positions, to education, law, health, nursing, as well as natural and applied sciences, Lamb said.

The good news is these occupations with the lowest risk of being affected by automation are projected to produce nearly 712,000 new jobs between 2014 and 2024.

Technology can result in labour market restructuring and not necessarily long-term unemployment, says the report.

“For occupations where technology easily substitutes for labour, jobs are often lost and workers are required to relocate to other industries,” says the report. “For the occupations that require signi­ficant creativity, thinking and problem solving, technology often complements labour, which raises productivity.”

This improved productivity may result in increased individual earnings and thus more demand for other goods and services. This creates a virtuous cycle that ultimately results in job creation, Lamb said.