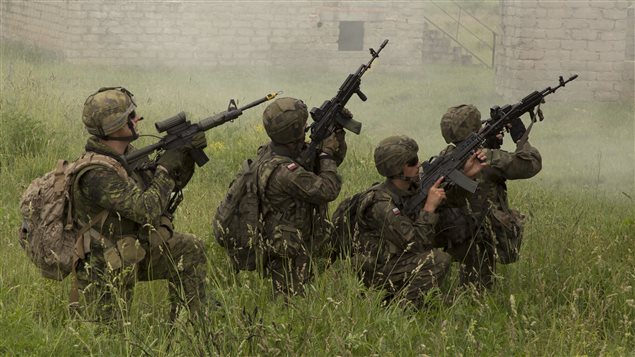 Sgt. Frederik Essiambre (left), an engineer of 5 Combat Engineer Regiment deployed to Poland as part of the Operation REASSURANCE Land Task Force (LTF), participates in an urban assault alongside a Polish Army section during Exercise ANAKONDA, in Wedrzyn, Poland on June 9, 2016.

And so it is probably fitting that after months of build-up and speculation, the government announcement that Canada is sending a battalion-size force to be stationed in Latvia was pre-empted by news reports.

“As one of four Framework Nations, Canada will establish and lead a rotational multinational NATO battlegroup, which will contribute to NATO’s enhanced Forward Presence in Eastern and Central Europe along with the United States, the United Kingdom and Germany,” Canada’s Defence Minister Harjit Sajjan and Foreign Affairs Minister Stephane Dion announced on June 30 after several news organizations, including RCI, had reported on the deployment to Latvia.

It would require the army to rotate one of its infantry battalions and a headquarters into the position once every six months.

The deployment goes contrary to the NATO-Russia Founding Act signed in 1997 where the military alliance explicitly agreed not to station troops along the Russian border in former satellite states.

Neither Russia nor NATO have officially withdrawn from the treaty, which commits both sides to “build together a lasting and inclusive peace in the Euro-Atlantic area on the principles of democracy and cooperative security.”

But NATO officials now argue Russia effectively tore up the treaty with the annexation of Crimea and that it has a duty to defend new members, including the Baltic states, Poland and Romania.

No Russian intention to invade

Paul Robinson, professor of Public and International Affairs at the University of Ottawa and an expert on Russia, says stationing Canadian troops in Latvia is not a very good idea.

(click to listen the full interview with Paul Robinson)

Secondly, Robinson says that he’s not convinced by any of the arguments that Canada itself would benefit from this, that we would somehow gain more influence, which will enable us to achieve important policy objectives.

Robinson says it’s understandable that given their past history and Russia’s recent behavior in Ukraine, the Baltic states and Poland feel threatened.

“But I think one needs to be realistic about the so-called threat rather than emotional and realize that the Russian threat to the Baltic states doesn’t really exist,” Robinson said. “There is no Russian intention to invade the Baltic states or cause trouble in the Baltic states. They have never shown any interest in that.”

And insofar as there is a possibility of something happening due to unforeseen circumstances sometime in the future, the best approach for the dealing with that is to improve our relationship with Russia, Robinson said.

“If we can calm things down and build trust on their side as well as on ours, then we’re much more likely to avoid problems, than by stocking tensions,” Robinson said. 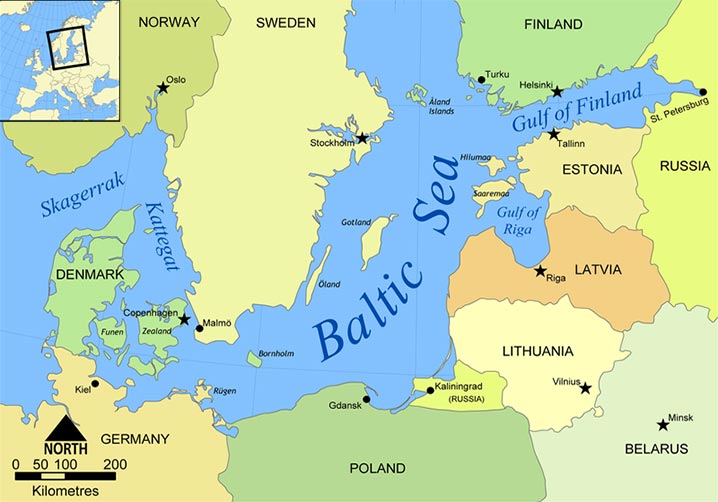 The deployment of NATO forces in the Baltics and Poland will add to the feeling of irritation Russia has been feeling since the NATO bombing campaign against Serbia during the war with Kosovo, which Russia vehemently opposed, Robinson said.

“In Russia the public climate is very hostile to NATO at this point in time, and particularly to the United States, and this is just one more thing adding to an already long list of grievances, which will harden attitudes in Moscow rather than make them more flexible or more reasonable,” Robinson said.

Still, at least there is a difference in tone between the previous Conservative government and the new Liberal government of Prime Minister Justin Trudeau, Robinson said.

The problem with that approach is that at some point Russia could lose interest in talking if it doesn’t see any change in Canada’s behaviour, even if at present they are happy that at least someone is talking to them, Robinson said.

The best case scenario for Russia in its relations with NATO is to go back to the way things were before the Ukrainian crisis, while at the same time keeping Crimea, Robinson said.

“Crimea is non-negotiable, it’s something they’ll never back down in the slightest but beyond that really they’d like to have good relations with the rest of the world,” he said. “They would like the end of sanctions and they would like to have the Western states and Russia cooperating on joint international problems, things that are of mutual concern to them such as the war in Syria or international terrorism.”

One of the problems in the relations between Russia and the West is the mutual inability to see how they look in each other’s eyes, and how their actions get interpreted by the other side, Robinson said.

“We’re so wrapped up that we’re the good guys and they are the bad guys that we simply cannot comprehend that we have done things, which might not look so good from somebody else’s point of view,” Robinson said. “There is sort of mutual inability to consider how other people might see us and that the way other people might see us may be based on something legitimate and may be reasonable, and may not just be as a result of their evil, aggressive tendencies.”