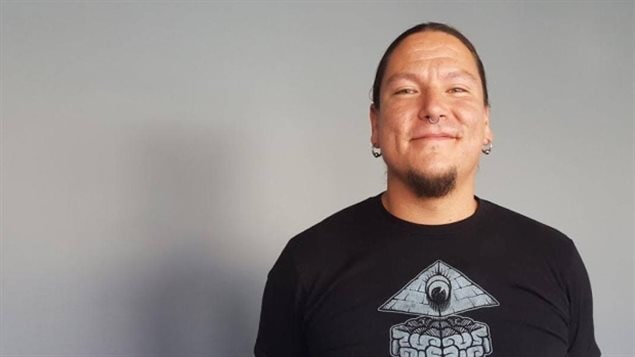 Mskwaankwad Rice is one of the people run an Ojibwe language inmmersion camp for the young people in the area near Espanola, Ontario.
Photo Credit: CBC

Miigwech, the word for “thank you” in the Ojibwe language, is one we hear used more often in Canada these days. At formal gatherings where it is becoming increasingly common to acknowledge the first nations, here before us in Canada. the word will be bandied about. It sounds like “me-gwich”.

“It defines us as a people”

Mskwaankwad Rice is working to help the next generation of Ojibwe people in northern Ontario know and use many more words than just thank you. Rice describes himself as an intermediate speaker. He says he got some instruction in school in the language as a child, but not enough to be fluent the way he’d like to be. And the younger generation knows even less.

So he, and some others with similar concerns, are holding an Ojibwe immersion summer camp. Several teachers and elders are coming in to help. In an interview on CBC radio, Rice described his own efforts to improve his knowleged and experience of the language as “humbling and difficult”, but he says it is imperative to make the effort because the language “defines us as a people”.

It is said it takes just two genertions to lose a language. Many of the elders remember when the language was spoken by everyone in the community. Many were also put through the hardship of residential school, where government policy enforced boarding school on the aboriginal children and prohibited them from speaking their native language, often violently.

The Anishinabe Spiritual Centre at Anderson Lake, near Espanola, Ontario is the location for the camp. It is for those committed to the experience, they must be at least 18, and along with the summer activities on the water, the everyday activities, such as going to a local store to pick up necessities will also be navigated in the their Ojibwe tounge.

The immersion camp is full with 12 students registered for the 10-day experience. Rice says the hardest part really “is making that step to speak because it’s really hard…. it’s humbling and it’s difficult”.

“It’s only very recently that we haven’t had our language… we need to do this in order for the language to survive and for us to maintain that sense of identity.”