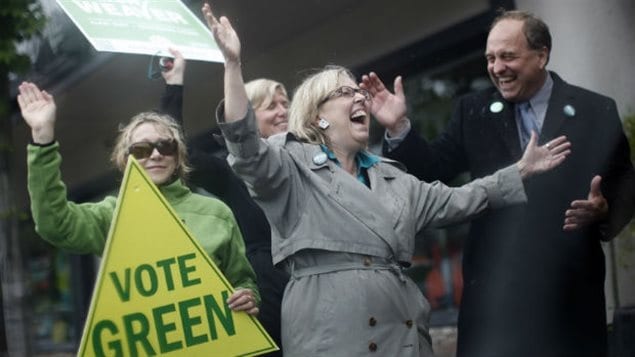 Federal Green Party Leader Elizabeth May (seen campaigning in Victoria in 2013) had high hopes of winning the riding in last fall's federal election. It didn't happen and now the party has been sanctioned for contravening the Canada Election Act.
Photo Credit: CP Photo

Sanctioned by Canada’s election watchdog, the Green Party has issued a public apology for tactics it used in a British Columbia riding in the run-up to last fall’s federal vote.

The apology was contained in a statement issued by the party’s executive director, Emily McMillan, late Tuesday.

Earlier Tuesday, Elections Canada sanctioned the party for deliberately pushing “misleading” election polling data in Victoria riding and ordered it to issue an apology on its website and in a national news release.

In fact, he said, the NDP lead had been increasing and the internal Green party poll was a week old.

Rankin, the incumbent, won the riding by over 6,000 votes.

The commissioner also found that the flyers did not include the poll’s margin of error–plus or minus 9.8 per cent–contravening the Canada Elections Act.

The riding is an urban seat in the heart of Victoria, containing all of the small municipality of Victoria itself, as well Oak Bay and the Cadboro Bay neighbourhood.

The Green Party won just one of 338 seats in last fall’s election–Party Leader Elizabeth May in the B.C. riding of Saanich—Gulf Islands.

With CP and CBC files.

One comment on “Green Party issues apology for tactics in B.C. riding”