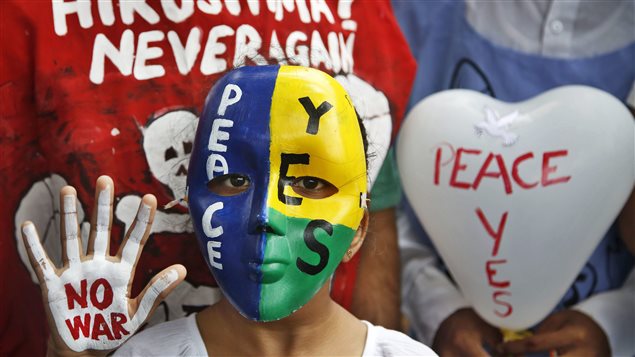 The World Social Forum 2016 is happening in Montreal this week, the first time the gathering has taken place in a North American city. The inaugural edition was held in Porto Alegre, Brazil, in 2001.

This is the 12th edition of the gathering that unites “groups in civil society, organizations and social movements who want to build a sustainable and inclusive world” as it says on the website. And this year nuclear disarmament is one of the key issues on the agenda.

Gordon Edwards is the head of the Canadian Coalition for Nuclear Responsibility. He described the poignancy of the subject as the day began with a memorial to the victims of the Nagasaki atomic bomb, on this the day before the 71st anniversary.

“In the year before the dropping of that bomb there was a secret laboratory here in Montreal where in fact scientists from Canada, Britain and France, were studying the best ways of making plutonium for bombs so there is a direct connection with Montreal in that sense.” Edwards said.

The beginning of the day also included a Mohawk delegation of Elders from the traditional council of the Mohawk community of Kahnawake, just across the river from Montreal. The elders talked about how “out of kilter” the world has become, and the danger of nuclear weapons and facilities, and the potential for such widespread destruction and death.

The forum is focusing nuclear issues this year because of the renewed political tensions in the world. Gordon Edwards says that despite progress in the past to reduce nuclear arsenals, there is a move now to spend “huge amounts of money in reconstituting and in fact modernizing the nuclear arsenals; this does not bode well for the planet.” he says.

Gordon Edwards says “it seems to be question of urgency because we’re turning a corner here and it’s a very dangerous corner. Instead of getting safer and safer we’re heading towards a world where it’s getting more and more dangerous.”

The International Physicians for the Prevention of Nuclear War describe nuclear capability as an “addiction” according to Edwards. He says the group, which won the Nobel Peace Prize in 1985, and included the private physicians of both Ronald Reagan and Mikhail Gorbachev; describe the insanity of knowing that “a war fought with nuclear weapons is a war without any winners at all”. And yet they cannot kick the addiction.

Edwards will be attending the series of 12 workshops at McGill’s McConnell Engineering building covering all the current nuclear issues. He said an interesting talk this morning by Arnie Gunderson, someone who has worked on the inside and the outside of the industry, drew attention to the fact that nuclear power is not the solution suppliers suggest it is.