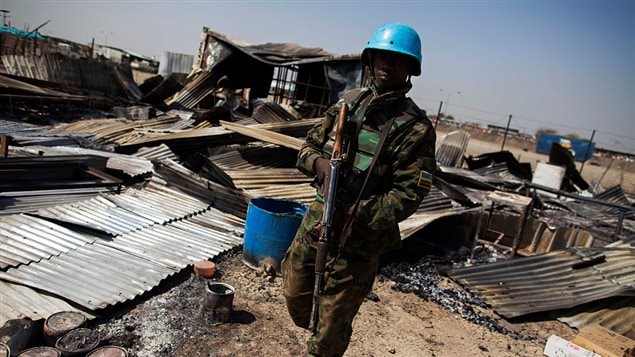 A UN peacekeeper from Rwanda walks through the remnants of a looted and burnt clinic in the UN Protection of Civilians (PoC) site in Malakal, on February 26, 2016.
Photo Credit: ALBERT GONZALEZ FARRAN/AFP/Getty Images

Stay away from Mali and be transparent about the risks.

That’s the advice Stephen Saideman would give to Canada’s Defence Minister Harjit Sajjan as he weighs his options for a yet-to-be-announced peacekeeping mission in Africa.

“I’d warn him off Mali,” said Saideman, Paterson Chair in International Affairs at Carleton University and author of Adapting in the Dust: Learning Lessons from Canada’s War in Afghanistan. “That’s going to be a very intense mission, the experts I have talked to compare it to Iraq.”

And for any peacekeeping mission to succeed the Liberal government of Prime Minister Justin Trudeau would have to make a long-term commitment, he said.

(click to listen to the full interview with Stephen Saideman)

Where? When? One or many?

In late August, the Liberals announced the government will spend $450 million over three years on a peace and stabilization fund, and will commit up to 600 Canadian soldiers and 150 police officers for peacekeeping operations.

That set the pundits speculating on whether the Liberals are preparing to announce a major peacekeeping mission in line with their October 2015 electoral platform.

“Well, the first thing is we don’t even know whether it’s going to one mission or many,” said Saideman. “There is a debate in Ottawa about whether Canada would be best to put all of its 600 troops in one spot or to have Canadian Forces send a bunch of teams of specialists to several different missions.”

These Canadian specialists in the fields of communications, logistics, intelligence and so on could help a UN mission to be much more effective, Saideman said. They are called force multipliers or enablers in the military jargon.

Each of these scenarios – sending one big mission or deploying multiple teams to several different missions – has its advantages and risks.

If the Liberals are looking for a way to enhance Canada’s visibility on the international stage, sending a single big contingent to one hotspot, is the way to go, Saideman said.

“It would help improve things in one place and then because Canada would be providing a significant force in that one place, it would indeed have more influence over how that entire operation takes place,” Saideman said.

However, sending a larger contingent means that the Canadian soldiers will be called on to work in the field, which is inherently riskier.

The advantage of dividing Canada’s contribution between several peacekeeping missions is that you could make a difference in many different places so that so you’re having a wider influence, making multiple countries happy, Saideman said.

It could also be less risky because while in this scenario Canadian troops would be relying on other countries for their security, they are also not going to be spending much time “outside the wire” since the very nature of their work would be headquarters-based, Saideman said.

The disadvantage is that you have less control of the effort and are overall less visible.

Which mission is the best fit for Canada?

Any of the nine current UN peacekeeping missions in Africa could benefit from the expertise of Canadian soldiers and their capabilities, Saideman said.

“But chances are that sending one battalion into what is a very, very large mission in the Democratic Republic of Congo would probably make the least amount of difference because it’s such a big country with so many problems and there is already a large UN mission there,” Saideman said.

The Mali mission may be the riskiest because of the ongoing violence there but, on the other hand, Canadian soldiers, who have cut their teeth on the counter-insurgency operations in Afghanistan, know how to operate in such a tough environment.

“So, they’ll probably bring a lot more added value in Mali,” he said.

The debate and speculation about Canada’s peacekeeping mission seems to be focused entirely on Africa. But Saideman says he wants to know why no one is speaking about a possible mission to Colombia, which has just concluded a peace deal with the leftist FARC rebels who have fought the government for over half a century.

“We now have a peace agreement in our hemisphere that needs some peacekeeping effort for it,” Saideman said. “So why not a little closer to home? I understand that this government is dedicated to Africa but if we want to help out people in our own hemisphere, then Colombia makes sense.”

One of the many lessons the Trudeau government can draw from Canada’s 13-year engagement in Afghanistan is to be as transparent as possible about the risks of the mission, Saideman said.

“The Liberal government in 2005 and 2006 was very clear about the risks but people weren’t paying attention because they just didn’t believe it,” Saideman said.

The government also needs to be honest about how long the mission will take, he said.

“There is always the temptation to say that these things are going to be short, in and out,” Saideman said. “Let’s be honest and take responsibility. The reality is that if you want to make a difference in any of these hotspots, you have to be there more than six months or a year.”

Is it worth the risk?

The real question to ask is what the politics are how close are they to a lasting settlement, how many of the various actors are willing to sign on to whatever agreement the UN can negotiate, Saideman said.

“If you can get most people on board, if they are close to a political solution, then it makes more sense to contribute,” Saideman said. “If you’re far away from a political solution and you’re just sending troops in the middle of a civil war that is far from being resolved, then that might be a bad idea.”

Sending peacekeepers into Syria, for example, would make no sense because the parties are so far from a political solution, Saideman said. The same seems to apply to Mali as well.

The Liberal plans for a return to a major UN peacekeeping role have drawn fire from the opposition. The conflicts in sub-Saharan Africa are dangerous, interim Conservative Leader Rona Ambrose reminded the House of Commons during question period this week.

In an interview with The Canadian Press, Ambrose suggested Trudeau’s real motivation is a desire to get Canada a seat on the UN Security Council in 2021.

“Do we have to send our men and women into harm’s way to reach Mr. Trudeau’s goal?” Ambrose said.

Canada withdrew its bid for a seat on the UN Security Council in 2010 when the Conservatives were in power.

The UN is currently running nine peacekeeping operations on the African continent:

These UN missions have cost 693 peacekeepers their lives.