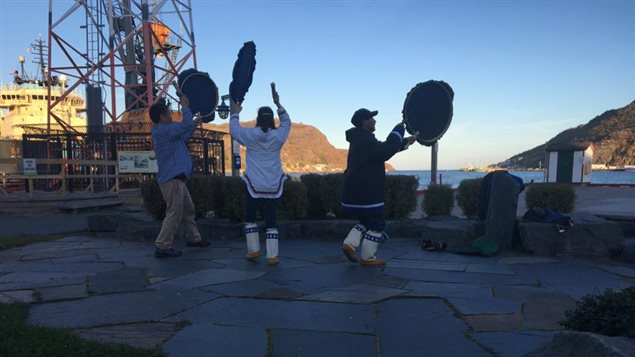 Dozens of artists, elders, researchers and policy makers gathered in St. John’s this weekend for a scientific and cultural event featuring and celebrating Canada’s Inuit people.

The Biennial Inuit Studies Conference 2016, which runs from Oct. 7 to 10 in the capital of Newfoundland and Labrador, brought together representatives from Canada’s four Inuit regions: from Nunatsiavut, in northern Labrador, Nunavik, in northern Quebec, the territory of Nunavut and Inuvialuit, in the Northwest Territories.

The conference was hosted by Memorial University and by Nunatsiavut, marking the first time an Inuit government co-hosted the event.

“It used to be mostly white academics who would present on their research in the Arctic and very much contributed to the frustrations that Inuit have of being researched without much benefit to the community,” said Laakkuluk Williamson Bathory, a well-known Iqaluit-based poet, performer and advocate.

“But as it evolves, there are more and more Inuit who are engaging on an academic level about our own communities, so I find it very important to be able to speak with and engage with all of these Inuit intellectuals who are astute in their own work and also very challenging of other people’s work in a very progressive way.”

(click to listen to the full interview with Laakkuluk Williamson Bathory)

Speaking to RCI on the phone from St. John’s, Williamson Bathory said she and Vinnie Karetaq, chairman of the Qaggiavuut non-profit society for performing arts in Nunavut, will be taking part in panel discussions on the future of performing arts, as well as performing in a number of different capacities.

Williamson Bathory and Karetak said they will also use the opportunity to champion for the creation of a dedicated performance arts centre in Iqaluit, the capital of Nunavut.

(click to listen to the full interview with Vinnie Karetak)

Nunavut-based artists have collaborated with artists from Nunatsiavut, Nunavik and Inuvialuit , but having their own performance arts centre will allow them to take their collaboration to a new level and include whole of the circumpolar world, Karetak said.

“Hopefully soon we could start working more closely with international folks,” Karetak said. “Greenland has a strong performing arts scene and we’re looking at ways of maybe working together so we can be what we aspire to be.”

The event also presents Inuit artists and performers an opportunity to learn from each other, as well as educate non-Inuit about the realities of life in the Arctic, Williamson Bathory said.

“I’m very motivated to make art and performance within my community, I love the collaborative aspect of creating art with Inuit, for Inuit,” Williamson Bathory said. “But also I do really believe that it’s important for us to engage in an artistic dialogue with all sorts of non-Inuit too because that’s the way that art keeps on forming, and there is such power in using art to create dialogue.”

Karetak, who produces a popular TV show in Inuktitut, said he was interested in attending some of the presentations focused on education and preservation of Inuit culture and Inuktitut language, especially among children who are increasingly exposed to other cultures.