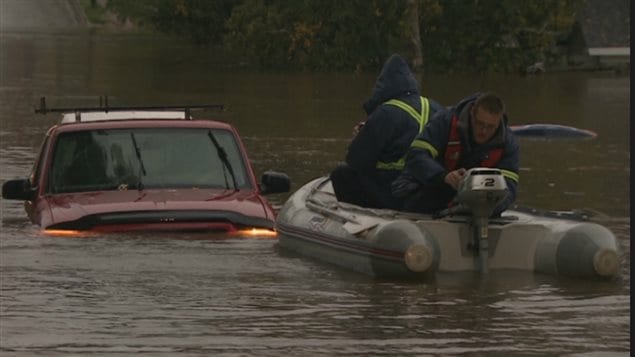 Emergency crew comes to check for people possibly stranded in a vehicle caught in the sudden flood in Sydney, N.S.
Photo Credit: CBC

It wasn’t hurricane Matthew, but it was however a low-pressure system  created by the hurricane and that was plenty.

Though not the actual hurricane, the winds were nonetheless over 100km/h over the region in many areas and were accompanied by a massive deluge yesterday and continuing into today. The resultant one-two punch has caused havoc along the east coast.

This is especially so in Nova Scotia’s Cape Breton area, and in the Atlantic island province of Newfoundland.

Up to 200 mm of rain has fallen in many areas causing huge flooding of city streets, along with roads washed out and-or blocked by fallen trees and debris . The fallen trees also brought down power lines down leaving thousands of residents without power.  The city of Sydney, Cape Breton had a record of 220mm of rain falling along with gusts up to 117km/h.

At least one home collapsed and was blown down by the storm.

At one point over 100,000 homes were without power, although that number has since been reduced by about half as crews worked throughout the day yesterday and continue today.

Although there is no word yet on a boil water advisory, residents in affected areas are being told to avoid the floodwaters which are contaminated with fuels and sewage.

Many schools and other services have been closed in Cape Breton and Newfoundland.