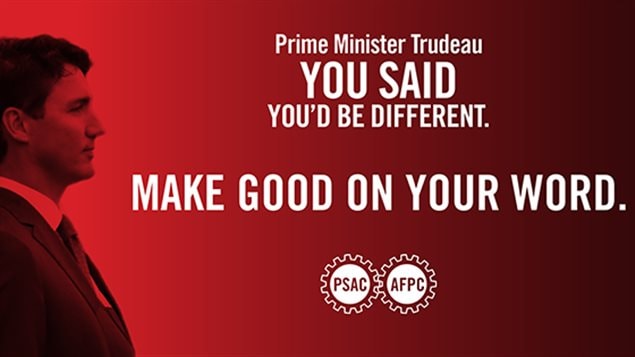 It’s called PSAC- the Public Service Alliance of Canada. It is one of the biggest labour unions in the country, and it’s members are not happy.

PSAC, with about 170,000 members, has begun a media campaign targeting Canada’s Prime Minister Justin Trudeau. The campaign is called “make good on your word”.

The union has been in contract talks for the past two years, first with the Harper Conservative government and since late last year with the Trudeau Liberal government.

PSAC’s relationship with the Conservative government was not good, and when Trudeau took power, he made pains to publicly say things would be different under his Liberal government

The campaign now turns the Prime Minister’s own words against him with the headline “You said you’d be different”.

A PSAC press release said that “ At the most recent set of negotiations between PSAC and the Treasury Board, it was clear that the Liberal government is still using the Conservatives’ bargaining agenda.”

One of the issues is paid sick leave days. Currently federal employees get 15 days paid leave, and can carry unused days  from year to year.

The government is proposing eight paid sick days with two unused days carried over to the following year. There are currently 15 million days of unused sick leave which the government wants to abolish.

The union is asking for nine percent wage increases over three years, the government is proposing 0.5 percent in each of three years.

PSAC members have also been dealing with substantial problems with a new pay system called Phoenix introduced in February.  Tens of thousands of members have either been underpaid, intermittently paid, or had no cheques at all.

PSAC has been urging the government to repair the system. Chris Aylward, vice-president of the Public Service Alliance of Canada, said in August, “This is a prime example of what happens when you over-rely on technology and try to replace humans with technology. It simply doesn’t work”.

The government said it will have the system repaired by October 31.