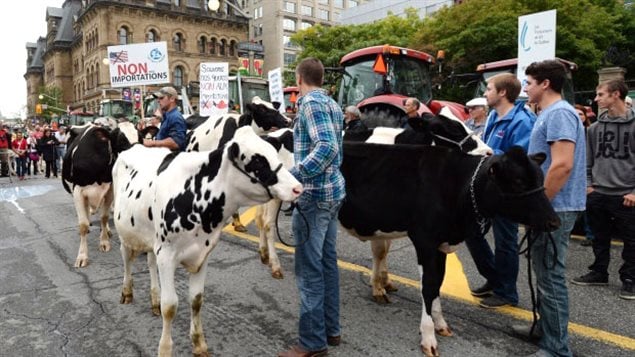 Oct 2015- Ottawa: Canadian farmers protesting aspects of the TPP trade deal in front of Parliament. In addition to other concerns about their livelihood threatened by the deal, They say the trade deal would allow US milk treated with hormones into the Canadian dairy supply system.

Canadian Shiv Chopra recently returned from the Hague where a mock international tribunal, and parallel “People’s Assembly”, were discussing if the multi-national bio-tech and chemical giant Monsanto, can be held accountable under human rights laws.

Micro-biologist and veterinarian, for over three decades Chopra was a senior scientific advisor at Health Canada, His job as a regulator was to analyze evidence as to whether to allow or disallow certain chemicals or technologies in food products in Canada.

He is now concerned that potentially dangerous drugs, hormones, etc., in food will be allowed into Canada under aspects of international trade deals like CETA and TPP which he says would override Canadian food safety rules.

Unlike many who are concerned about the various hormones, antibiotics, chemicals, and GM technologies that are being used in food sources, whether animals or crops, Chopra is able to give insight into the regulatory side of the process.

He says people arguing against giant companies like Monsanto and Bayer (awaiting approval to merge) are aiming at the wrong target.

As a government scientist, he says the multi-nationals couldn’t directly influence his decisions, but they could and allegedly do influence governments. He says it is the governments which in turn pressure scientists to approve potentially, and even known to be dangerous, drugs, processes, or technologies in food production.

Chopra has written about his experiences as a food safety regulator in a 350 page memoir called, Corrupt to the Core – Memoirs of a Health Canada Whistleblower. In it Chopra reports what happened in the 1990s at Health Canada regarding approval of  Bayer’s “Baytril”, an antibiotic used as a growth promoter in food producing animals. The drug was found to cause bacterial resistance in animals putting people eating those animals at risk, and exacerbating the growing concern over resistant ‘superbug’ bacteria. He was told that only one person in a million would die as a result, but he said, that one person was too many, and he would not sign his approval.

This is similar to the case with rGBH, a synthetic growth hormone that promotes milk production in dairy cows. It is a questionable drug in terms of its effects on humans, but is known to cause greater infections in cows, requiring more antibiotic use, in turn increasing concern over creating antibiotic resistance in bacteria.

In a press release, Chopra said, ““There are two kinds of science today, one for the public good, or public interest and the other for the corporate interest.”  He feels these huge international trade deals like NAFTA, CETA, TPP and so on are for the benefit of the latter.