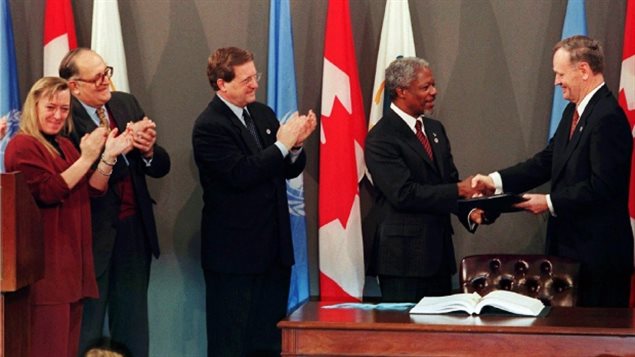 Still very much with us, landmines remain a scourge–by-products of the worst of mankind.

Planted in the ground, invisible to the naked eye, they kill and maim unsuspecting victims, previously doing something as basic–and innocent–as taking an afternoon walk in the woods.

But if landmines are a reflection of our very worst, the people making the effort to eradicate them represent our better angels.

Lloyd Axworthy, for one.

A product of Winnipeg, Manitoba’s North End, Axworthy, now 76, rose to a number of cabinet positions in the Liberal governments of Pierre Trudeau and Jean Chretien, mostly drawing raves about his handling of any portfolio he might hold.

But it’s his work as Canada’s foreign minister that he will likely be most remembered and honoured.

Twenty years ago this week, respresentatives from 75 countries gathered in Ottawa to do begin to do something about landmines.

Axworthy was in the forefront, driving the negotiation of a treaty to create a new legally binding international norm against landmine use.

On March 1st, 1999, 122 countries committed to the Convention on the Prohibition of the Use, Stockpiling, Production and Transfer of Anti-Personnel Mines and on Their Destruction, informally known as the Ottawa Convention, or the Ottawa Process.

Today, the treaty bears the signatures of 162 countries.

It has resulted in a sharp decline of the number of people killed or maimed by landmines–from about 27,000 persons a year to between 3,000 and 4,000 a year.

Still, an estimated 50-to-100 million landmines remain buried in countries around the world.

This week in Toronto a number of groups are gathered to discuss the effort to finish the job of eradicating landmines and ways to galvanize a new generation to join the effort.

During a break in the proceedings, he spoke by phone with RCI.