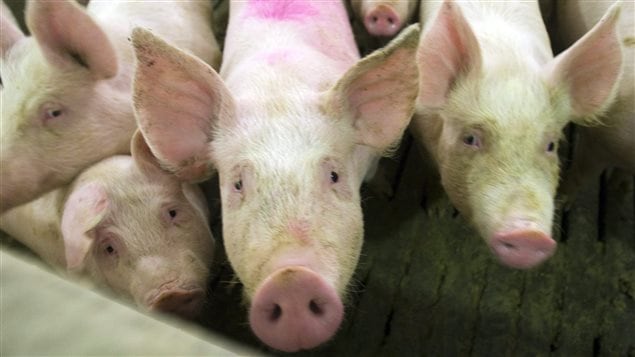 Canadian producers export over 60 per cent of their pork, which in 2014, was valued at $3.4 billion dollars.
Photo Credit: Ryan Remiorz/Canadian Press

Pork production is big business in Canada with Japan buying $868-million worth of Canadian product. The Globe and Mail reports there is a growing Japanese demand for specialty pork.

Most pigs in Canada are fed barley and wheat. But for the specialty market in Japan, the newspaper reports some pigs’ feed is spiced with mint and ginger and they get far more rest before slaughter to ensure that stress does not make the meat dry.

The Canadian Pork Council reports that exports to Japan generate 12,000 jobs. It says that if the Trans Pacific Partnership (TPP) were to be implemented, Canada could increase those exports by 10 per cent and generate an additional $87 million per year. However, U.S. President-elect Donald Trump has vowed to scrap the TPP trade deal which may lead to its collapse.

Japan is a huge importer of pork and pays two times or more the total Canadian pork carcass value. It buys most pork from the U.S. and Canadian imports come in second.

With Trump threatening to put restrictions on the importation of Canadian meat to the U.S., Canadian producers are all the more motivated to protect and enhance trade with other nations.