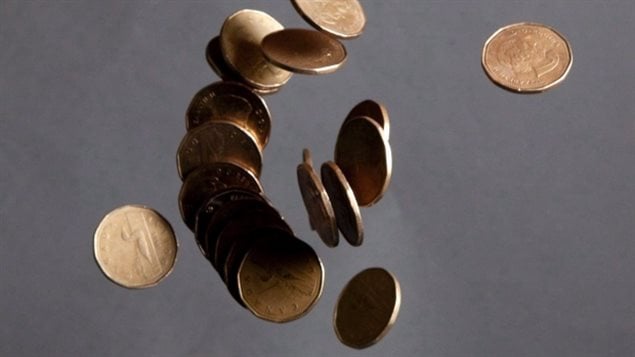 Several economists expect the Canadian dollar to sink to as low as 70 cents US
Photo Credit: Jonathan Hayward/The Canadian Press

Loonie to dive in relation to US dollar in 2017

The Canadian dollar, which is trading at around 74 cents US right now, could sink as low as 70 cents US in the first half of 2017, according to a report in The Globe and Mail.

The Toronto-based newspaper says American bank JP Morgan Chase and Canada’s Scotia Bank forecast the loonie to be around 70 to 71 cents US mark.

“We see something broadly similar to that, we’re not quite that bearish on the Canadian dollar, but on balance we think it’s more likely to weaken than strengthen in 2017,” Doug Porter chief economist and managing director of BMO Financial Group said in an interview with RCI.

(click to listen to the full interview with Doug Porter)

The BMO expects the loonie to hover in the vicinity of 72 cents US in the coming year, Porter said.

Porter cautions though that the Canadian dollar can be pushed around quite quickly depending on what oil prices do.

“If oil prices for whatever reason happen to be a lot stronger than expected over the next year, that could knock out all these forecasts right out of the ball park,” Porter said.

Much of the loonie’s recent slide has been driven by the events in the United States, Porter said.

“The US dollar is rising aggressively against almost every currency in the world since the U.S. election,” Porter said. “The Canadian dollar has actually strengthened against most other currencies. Our decline has been relatively modest.”

The Mexican peso, which has weakened by about 10 per cent, is the most dramatic example of this much wider phenomenon, Porter said.

“The view is that fiscal policy or spending policy and tax policy will be quite aggressive under Mr. Trump and U.S. economy will get at least a short-term boost,” Porter said.

The U.S. Federal Reserve is expected to raise interest rates in December and a few more times in 2017, Porter said.

“Really no one else is raising interest rates, so much of this is a US dollar story,” he said.

Benefits of the lower loonie have yet to materialize

At the same time the Canadian manufacturing sector has yet to see major benefits of the lower Canadian dollar, Porter said.

Part of the phenomenon can be explained by the fact that the Canadian dollar has not weakened against other currencies, he said.

“Quite the opposite, we’ve actually strengthened quite a bit against the Mexican peso and we’ve basically stayed in place against some of the European currencies over the last three years, so we haven’t really gained big competitive advantage against some of our key competitors,” Porter said.

Nevertheless, some areas that are sensitive to the exchange rate such as tourism or the tech sector have benefited from the weaker Canadian dollar, he said.

In the coming weeks, economists will be closely watching president-elect Donald Trump’s picks for some of the key economic portfolios for any hints on his future policy, Porter said.