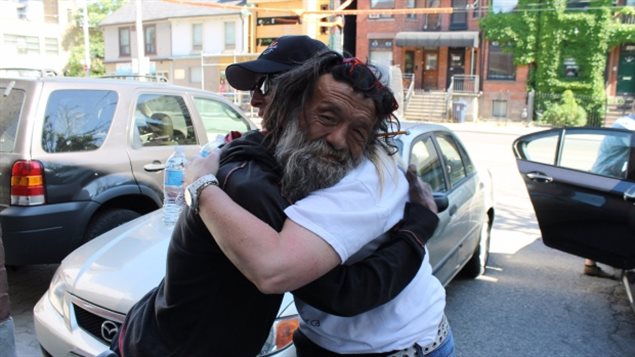 The founder of Engage and Change of Toronto, Jody Steinhauer, gives survival kids to homeless people. Her charity is participating in Giving Tuesday this year.
Photo Credit: Jody Steinhauer/Engage for Change

After four days of intense shopping activity, Canadians are being asked to make charitable donations of goods, time or money on what has come to be known as Giving Tuesday.

This giving campaign began in the United States in 2012 and was designed to follow Black Friday, which has morphed into a three-day shopping frenzy and Cyber Monday, where sales are promoted to attract online shopping on the fourth day.

This marketing and shopping activity has spread to Canada and so has the idea of a day of giving as an antidote to the buying frenzy.

More than 5,000 charities now participate by listing themselves on the Giving Tuesday website and organizing their own events for the day. Last year, millions of Canadians participated. Donations and other forms of giving have tripled since 2012.

Aims to reverse a decline in donations

“Overall, I’d just love to help rise the tide if we can,” says John Hallward, founder and chairman of GIV3 and one of the founders of the Canadian Giving Tuesday campaign. “In Canada, the charitable giving behaviour is slowly declining. If you look at our tax returns, the incidence of tax-filers claiming a charitable tax receipt has been declining for 30 years…

“The amount of donations per tax-filer has also been declining for the last 10 years. So, it’s not even keeping up with inflation.

“So what we’re trying to do through different initiatives…is to help slowly turn that around.”

There are now over 70 countries that participate in the Giving Tuesday campaign.