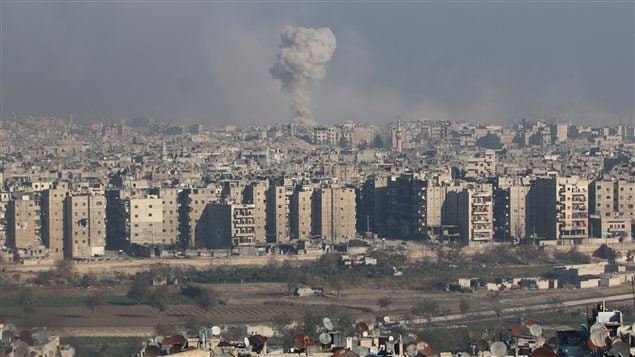 The United Nations General Assembly voted 122 to 13 today to support a Canadian-drafted resolution demanding an immediate cessation of hostilities in Syria, humanitarian aid access throughout the country and an end to all sieges, including in Aleppo.

Thirty-six countries abstained in the vote on the resolution on the nearly six-year-old Syrian conflict that has killed over 400,000 people and displaced more than half of Syria’s population.

“One hundred and twenty-two countries of the world came together to say to the Syrian regime and its backers that enough is enough,” said Canadian U.N. Ambassador Marc-Andre Blanchard in a phone interview with RCI.

“Humanitarian assistance should be provided now to the people in eastern Aleppo and all of the other besieged cities of Syria.”

It’s very unusual for the General Assembly to come together so quickly in a very exceptional manner to have a plenary session on a situation like the humanitarian assistance in Syria when the Security Council fails, the senior Canadian diplomat said.

“It just shows you that the world has reacted very strongly to the fact that the Security Council has not been able to agree to anything with respect to humanitarian assistance in Syria,” Blanchard said.

Effect on the ground

The Syrian army pressed an offensive in Aleppo on Friday with ground fighting and air strikes in an operation to retake all of the city’s besieged rebel-held east that would bring victory in the civil war closer for President Bashar al-Assad.

But Blanchard said the Canadian-sponsored vote was already having an effect on some of the fighting.

“Yesterday, on the eve of this session Russia decided to unilaterally cease the bombing for the time being in eastern Aleppo, they’ve offered corridors for civilians to get out,” said Blanchard. “Well, it’s one thing to offer the corridors, it’s another thing to make sure that they are secured and that the people have the choice to go where they want to go, and actually at the end they are not abducted.”

Russia is a close ally of Syria and has been providing military backing to the government for more than a year.

Russian U.N. Ambassador Vitaly Churkin told reporters on Thursday of the resolution: “To expect that it is going to produce some kind of dramatic U-turn in the situation in Syria is unrealistic.”

The U.N. resolution asks the U.N. secretary-general to report in 45 days on the implementation of the resolution, Blanchard said.

“Now the ball is in the court of the Security Council and of the member states that are involved in the conflict more directly,” he said.

Syrian U.N. Ambassador Bashar Ja’afari said that Syria was fighting a war on terrorism “on behalf of the entire world.”

He said unilateral sanctions imposed on Syria “affect in the first place the Syrian citizens and impede the ability of the Syrian government to respond to the daily needs of Syrian citizens, particularly those who have been disadvantaged as a result of the terrorist war imposed on my country Syria.”

“You are slowly asphyxiating the population you ardently claim to care about,” he said on Friday.