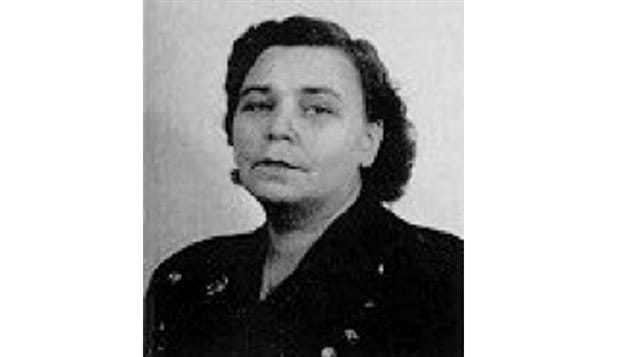 Marguerite Pitre-the last woman hanged in Canada for her role in mass murder in the bombing of a passenger plane in Quebec
Photo Credit:

Her name was  Marguerite Pitre. On this date at 35 minutes past midnight, she became the thirteenth, and last woman to be hanged in Canada.

Her crime was being an accomplice to mass murder in connection with the bombing of a DC-3 airliner over Quebec with its 19 passengers and 4 crew.

The case revolved around a love triangle involving another man, his wife and a young waitress.

Albert Guay had wanted to leave his wife in order to be with his young mistress.  At the time the Catholic religion was very  strong in Quebec, and Guay would not have been granted a divorce. Guay’s wife meanwhile discovered the affair and the whole thing fell apart as his mistress left him. Angry at his wife, in love with the young woman, and short on money he had took out a substantial life insurance policy on his wife, and devised the plan to get rid of her by placing a bomb aboard a flight she planned to take.

Owner of a slowly failing jewelry shop, he convinced his watch repair employee Genereux Ruest to make a bomb, allegedly to clear stumps in a field,  while Ruest’s sister, Marguerite Pitre, bought the dynamite.  Marguerite was well aware of Guay’s liaison with the young woman as she had also rented a room to the young woman so Guay could visit.

In addition to buying the dynamite, Marguerite had delivered the last minute “package” to the flight on time. But the scheduled flight was delayed due to a heated discussion between Guay and his wife. The last minute package was already aboard,  but because of the delay, the bomb went off while the plane was over land, and not over the wide  St Lawrence river where discovery of the cause of the crash would have been impossible to determine. However with the wreckage on land, good police work eventually uncovered the remains of a bomb.

Pitre later attempted suicide, but while recovering in hospital let it slip that Guay was responsible.  After he was convicted, he then turned on his accomplices.  Ruest and Pitre claimed innocence, Ruest stating he thought the bomb was for field stumps, and she saying she thought she was delivering a statue in the package aboard the plane.  Guay testified that they knew what was going on. They too were convicted and sentenced to death in Montreal for their part in the mass murder. Guay was hanged in 1951, Ruest in 1952.

Pitre was the last of the three to face the gallows in the very early hour of January 9, 1953, taking her dubious place in history as the 13th , and last woman to be hanged in Canada.

The bombing may have inspired a similar bombing in the US in 1955 by Jack Gilbert Graham whose bomb exploded in a passenger plane over Colorado killing his mother, 38 other passengers and five crew. He had taken out a large insurance claim on his mother whom he blamed for a bad childhood.

The Guay affair also resulted in a popular fictional book in 1982, by Roger Lemelin and a 1984 movie by Denis Arcand, both called “Le Crime d’Ovide Plouffe”