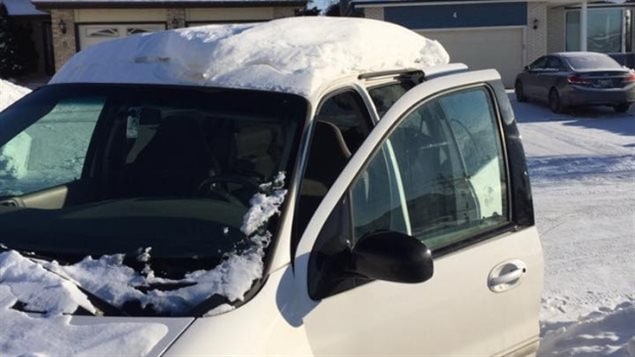 Jonathan McCullough was surprised when police pulled him over for driving with an unsecured load.
Photo Credit: Facebook

Driver fined for snow on top of van

Jonathan McCullough, was stopped by police in the western city of Winnipeg and given a fine of $237.50 for driving with snow on the roof of his van. Several jurisdictions have rules obliging drivers to clear snow from their vehicles because it can fly off and be a hazard to other drivers.

Not everyone is aware of the rules. McCullough told CBC news it took him a moment to realize that a police officer was trying to stop him. “When I rolled down my window he asked me why did I have so much snow on my roof, and I didn’t know what to say. I was completely dumbfounded by his question.”

The law in his province of Manitoba says divers must secure loads on their vehicles. McCullough said he didn’t realize it applied to snow and he plans to fight the ticket in court. In the meantime, he posted about the incident on Facebook to warn other drivers to clean off their vehicles so they won’t be fined.