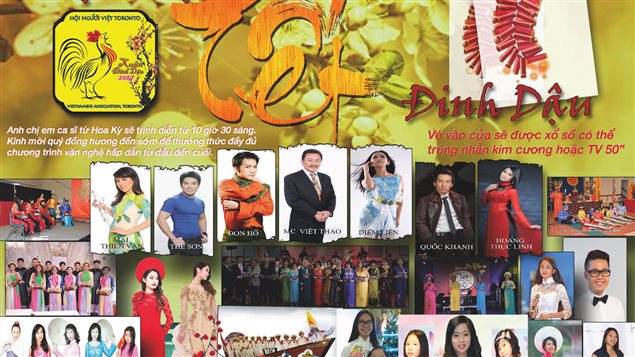 A section of the Viet Namese Tet Festival 2017 poster. The occasion will bring together almost 10,000 people on Saturday in Toronto.
Photo Credit: VAT

The Viet Namese Tet Festival 2017 takes place this Saturday at Toronto’s International Centre, and it will be the second-largest event of its kind in North America. The first will be in Orange County, California and the third-largest, in San Jose.

The largest community of Viet Namese in Canada is in the Greater Toronto Area and many of them will be part of the celebration. From 8,000 to 10,000 visitors will stroll through the centre on Saturday, sampling the great food, and enjoying the memories evoked by replicas of Viet Namese villages or temples and pagodas, and the music and dance that is part of every celebration.

“Canada had saved a lot of lives and had reintroduced us back to democracy, to freedom, to human rights, so we appreciate that very much.”

Member of Parliament, John McCallum, until this week, Canada’s Minister of Immigration, Refugees and Citizenship, will be attending. He will be heading to China in the near future as he has been named Canada’s new ambassador to that country. He is one in a long line of dignitaries, including former Prime Minister Stephen Harper and current PM Justin Trudeau, who have attended the annual celebration over these last 32 years.

Dr. Le, who arrived here as a boy, says the community is grateful. Canada was one of the first countries to welcome the Viet Namese, who as refugees became known as “boat people”. They took to the open water to escape their homeland, after the fall of Saigon to the communist regime, in 1975.

“Canada had saved a lot of lives and had reintroduced us back to democracy, to freedom, to human rights, so we appreciate that very much.”  At last year’s celebration there was a booth honouring that gratitude. At this year’s celebration, the 150th anniversary of Canada will be honoured.

“Comparing our life here to the current life in Viet Nam is totally two different pictures.” Dr. Le says. “Viet Nam, even though it’s been unified, that’s what Viet Nam likes to think, for the past 42 years, and economically, politically, and from every aspect of human rights, Viet Nam has gone backwards.

But the community that’s growing into the third and fourth generations has not forgot its roots. “And we in turn, we can contrast the life here in Canada with the life in Viet Nam and we certainly appreciate our freedom, our human rights, and actually we’re very actively trying to speak for democracy and human rights and justice back in Viet Nam, so we’re very active in that aspect”, says Dr. Le.

Like the other countries and ethnic groups to celebrate the Lunar New Year, such as the Chinese, and the Koreans, the actual New Year celebration on January 27th and 28th, will be an occasion for family gatherings, in homes cleaned out to welcome the new Year of the Rooster.

When asked what the year is understood to bring, Dr. Le says the Rooster represents hard work and friendship, but other than that, he’d have to consult his father. There will be time over the next few weeks.