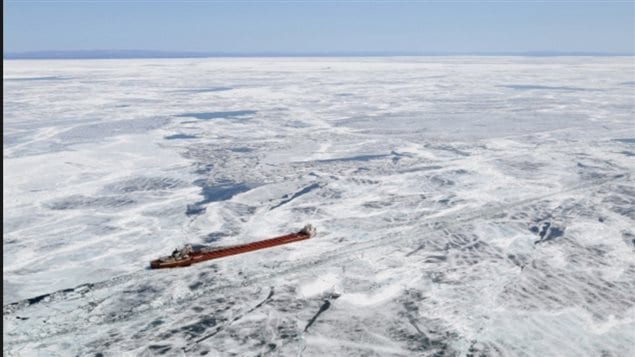 A freighter sits in ice near Whitefish Bay, on Lake Superior on April 7, 2015. The world's lakes have an impact on the hydrology cycle, climate and the whole environment, In addition to helping determine their role, the database determined such factors as the flow rate of the world's lakes. In Superior for example water will take 130 years to enter and leave the lake.
Photo Credit: Kenneth Armstrong/Reuter

Water is a critical component for scientists studying global climate and any number of other subjects, but until recently no complete “map” or database of fresh water on a global scale was available.

Bernhard Lehner (PhD) is an associate professor of Global Hydrology at McGill University in the Department of Geography, as senior author he helped to create this valuable new scientific tool.

In many countries around the world, there are plenty of lakes. Canada has a vast number, in fact about 60 percent of the world’s lakes. While one can open an atlas and see all kinds of lakes, that’s not really all that helpful to scientists. It also seems we don’t know nearly as much as we should about them.

Now a team from Montreal’s McGill University has sought to provide science with a much better tool regarding these fresh water resources. It’s a global database of all lakes around the world that are ten hectares in size or greater.

Quoted by the CBC he said, “The role in Canada’s ecology can’t be stressed enough. You need to appreciate how important they are in the whole water cycle. In Canada, there’s no water cycle without them, really.”

The research was published in an open source paper in the science journal Nature Communications, under the title “Estimating the volume and age of water stored in global lakes using a geo-statistical approach”.

The world’s oceans are often indicated as a major player in global climate, but so too are lakes, and yet they have never been really considered properly as no worldwide count or analysis existed. Scientists can use satellites for example to gauge the size of lakes, but satellites can’t see below the surface and so much important statistical data was simply not available.

The new database estimates the depth and water volume for over some 1.42 million lakes around the world. The researchers also estimated the residence duration of water in the lakes, that is, the time it takes for water to enter each lake, and to leave. The residence is an important consideration for a variety of scientific analyses.

Quoted by the McGill Reporter news, Professor Lehner said, “Lakes are changing, in a changing world,”  He added, “Some are disappearing as there is less water to keep them filled, others are created or growing in regions where there is more rainfall. So we need a good inventory of the current status of lakes to understand and monitor their changes and the effects that this may have for our global environment.”

The database is already being used by the McGill researchers in their own studies, and it is openly available to other researchers around the world who have also begun using it. Professor Lehner says additional features will be added in future to the global database such as data on the surrounding watersheds.

He notes that the new database will help scientists better understand what’s going on underneath the lakes surfaces and how that affects the global environment in both climate and ecology.