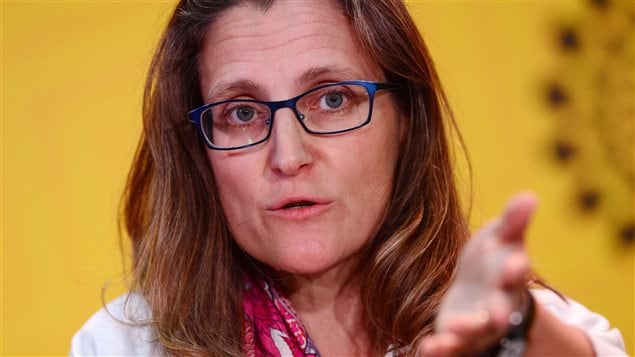 Freeze or thaw? What Freeland’s appointment means for Russia-Canada relations in the Arctic

The appointment of Chrystia Freeland, a fierce critic of the Kremlin and its actions in Ukraine, as Canada’s new minister of foreign affairs could put Canadian-Russian relations and the two countries’ collaboration in the Arctic back into deep freeze, argue some experts.

Paul Robinson, professor at the Graduate School of Public and International Affairs at the University of Ottawa and an expert on Russia, said Freeland’s appointment doesn’t augur well for the course to improve Canada’s relations with Russia taken by her predecessor, Stephane Dion.

Dion had sought to reverse the policy of the previous Conservative government of Prime Minister Harper who cut almost all political contacts with Moscow following Russia’s annexation of Crimea and its support for pro-Russian rebels in Eastern Ukraine.

“Freeland is on record as demanding a very hard line against Russia and has made a lot of very negative comments about the Russian government and President Vladimir Putin,” said Robinson, a former British intelligence officer. “And of course she’s on Russia’s sanctions list, so we have a foreign minister who is actually prohibited from travelling to Russia, which is I think must be something of a first in international relations.”

Love of the Russian language but not the Kremlin 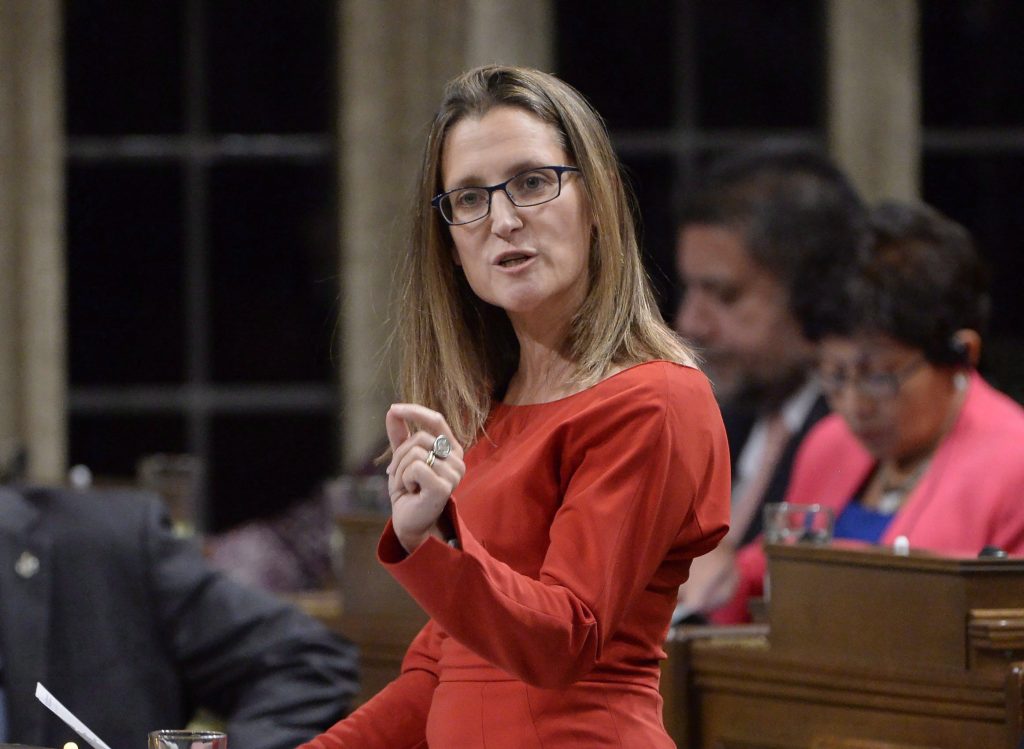 International Trade Minister Chrystia Freeland answers a question during question period in the House of Commons on Parliament Hill in Ottawa on Monday, October 24, 2016. THE CANADIAN PRESS/Adrian Wyld

Freeland, who is of Ukrainian origin on her mother’s side and calls herself a Ukrainian-Canadian activist, is among 13 Canadian blacklisted politicians banned from travelling to Russia since 2014.

When asked whether her activism in Ukraine and her criticism of President Putin could be a hindrance in bilateral relations, Freeland, who speaks fluent Russian and Ukrainian, responded that her knowledge of Russia and the region will be a big asset.

“I know Russia well, lived in Moscow for four years and really, really enjoyed it and I have a really deep love for the Russian language and Russian culture,” Freeland told reporters in Ottawa on Tuesday. “And I’m a very strong supporter of our government’s view that it is important to engage with all countries.”

Robinson said Freeland’s love of the Russian language and culture is not particularly meaningful in a political context.​

“You don’t, as foreign minister, deal with abstract Russia, whose culture you happen to like, you deal with a state and her attitudes towards the Russian state are very negative,” Robinson said.

‘Chill right to the heart of the Kremlin’ 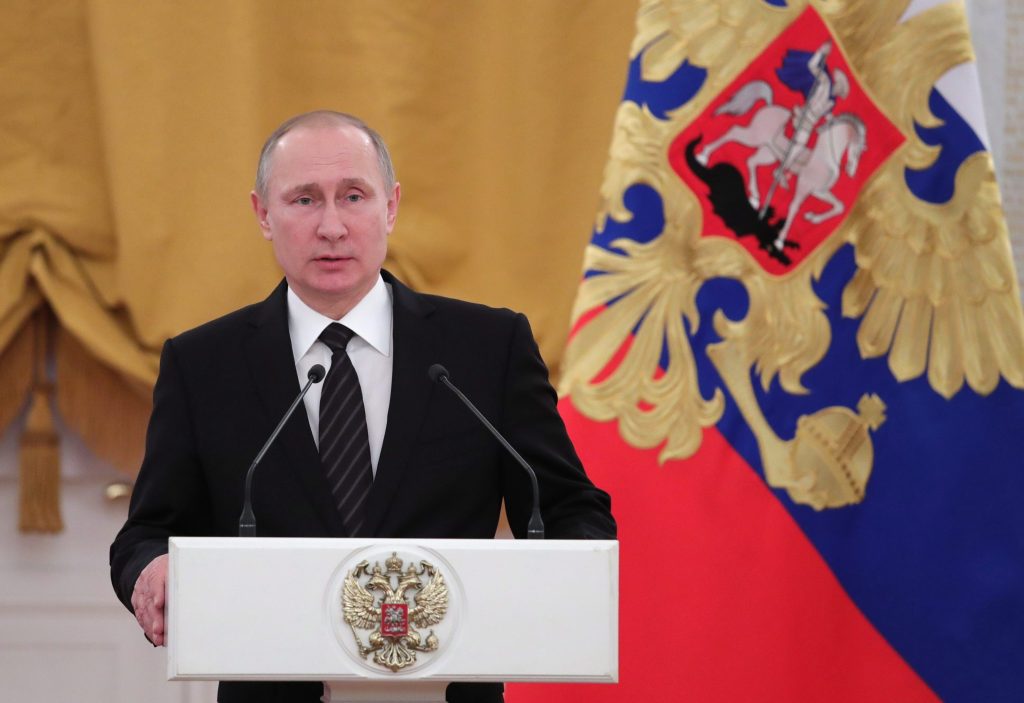 Moscow hopes that the new Canadian cabinet will “follow its stated intention to further re-engage with Russia in areas of common interest,” said Kirill Kalinin, spokesman for the Russian Embassy in Canada, in an emailed statement. “We are open to develop bilateral relations on the basis of mutual respect and reciprocity.”

Freeland, who previously served as minister of international trade, landed one of the most prestigious and difficult portfolios on Tuesday, after a cabinet shuffle left Dion, a brilliant academic and a veteran Liberal MP, out in the cold.

“The main initiative put forward by Mr. Dion as foreign minister was to pursue increased cooperation with Russia in the Arctic,” said Michael Byers, Canada Research Chair in Global Politics and International Law at the University of British Columbia.  “And it seems unlikely that Ms. Freeland will continue that policy given her very strong and very public opposition to Russian activities in Ukraine.”

Freeland, a former journalist who has written extensively on Russia, has been the most forceful opponent of Moscow in the prime minister’s caucus, Byers said.

“To appoint her as foreign minister certainly will send a chill right to the heart of the Kremlin,” Byers said. 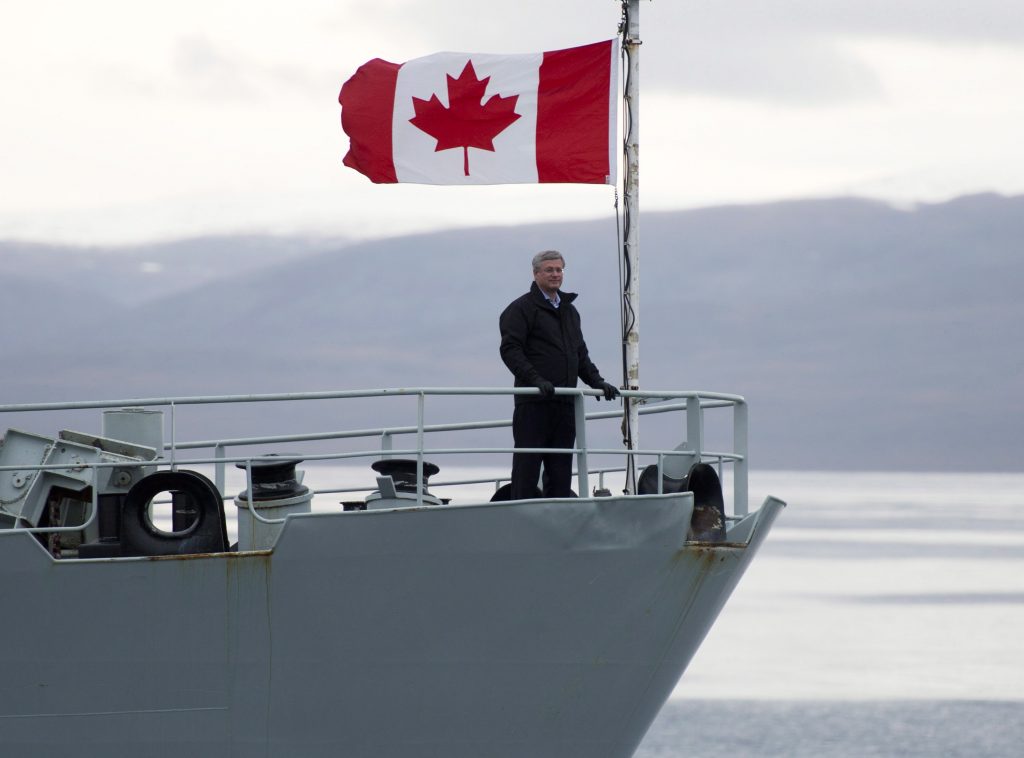 Canadian Prime Minister Stephen Harper stands on the bow of the HMCS Kingston as it sails in the Navy Board Inlet Sunday August 24, 2014. THE CANADIAN PRESS/Adrian Wyld

Still, Byers argues that the very nature of international relations and challenges presented by the Arctic to all of the circumpolar states, could force Freeland to treat Russian actions in Ukraine and the need for cooperation in the Arctic as different issues that require different approaches.

“In our interdependent world countries always distinguish between issues and find way to cooperate on necessary items of cooperation, while disagreeing on other items,” Byers said. “For instance, Canada and China have an extremely important economic relationship while disagreeing significantly on issues of democracy and human rights.”

Canada and the U.S. have a very deep, long-standing disagreement over the status of the Northwest Passage but that doesn’t stop the two countries from cooperating in the common defence of North America, Byers said.

Freeland will necessarily have to have contact with Russia, he said.

“The issue is whether there will be progress in increasing cooperation and that certainly will be more difficult given Ms. Freeland’s very public personal views regarding Russian actions in Ukraine,” Byers said. “It’s not impossible but will be more difficult, so I see a certain change in the direction of Canadian foreign policy.” 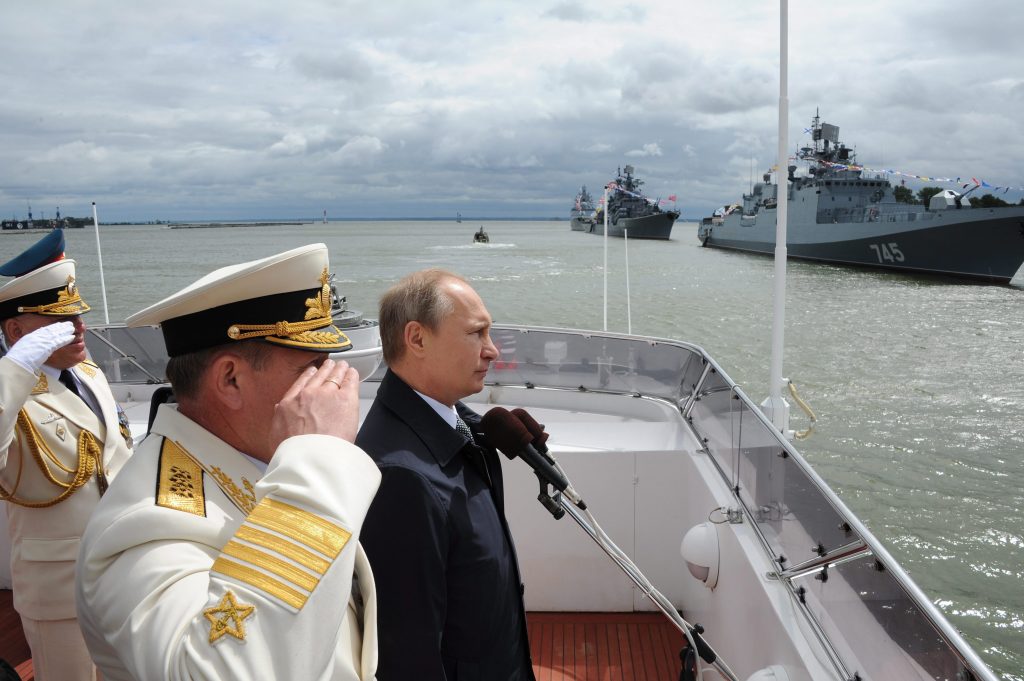 Rob Huebert, an associate professor in the Department of Political Science at the University of Calgary and a senior research fellow with the Centre for Military and Strategic Studies, said Freeland’s knowledge of Russia and her ability to analyse Russians is much more important in understanding her position vis-à-vis the Kremlin than her Ukrainian heritage and opposition to Russian actions in Ukraine.

“I think she has identified a very clear, growing security threat to Canada,” Huebert said. “Here’s an individual that, I think very much in opposition to what we can say Dion’s position was, understands that the Russia of today is not the Russia of the 1990s.”

Freeland has a much more realistic appraisal of modern-day Russia than Dion, Huebert said.

“We’re seeing a Russia that’s becoming much more assertive, much more willing to use military force to change boundaries and centralization within Russia, the crushing of the opposition, it’s a very different Russia than what it was in the 1990s,” Huebert said.

While cooperating with Russia where it serves Canada’s national interests, Freeland is much less likely to follow the idea that the Arctic is somehow different from the rest of the world, Huebert said.

“I’m hoping that what we’ll see with Freeland is of course the recognition that there are some areas that we can cooperate and we should cooperate,” Huebert said. “But by the same token, it’s still coming from a regime that we have to be very-very careful about how we treat.”

Freeland will probably be much more willing to accept the significance of the re-militarization of the Russian Arctic undertaken by the Kremlin in recent years, Huebert said.

The Kremlin denies any aggressive intent in its policy of building up its military capabilities in the Arctic. Moscow says it is simply restoring military capability and outposts in the Russian Arctic it was forced to abandon because of the economic collapse caused by the transition from Soviet planned economy to market economy in the 1990s.

Dealing with an Arctic hegemon 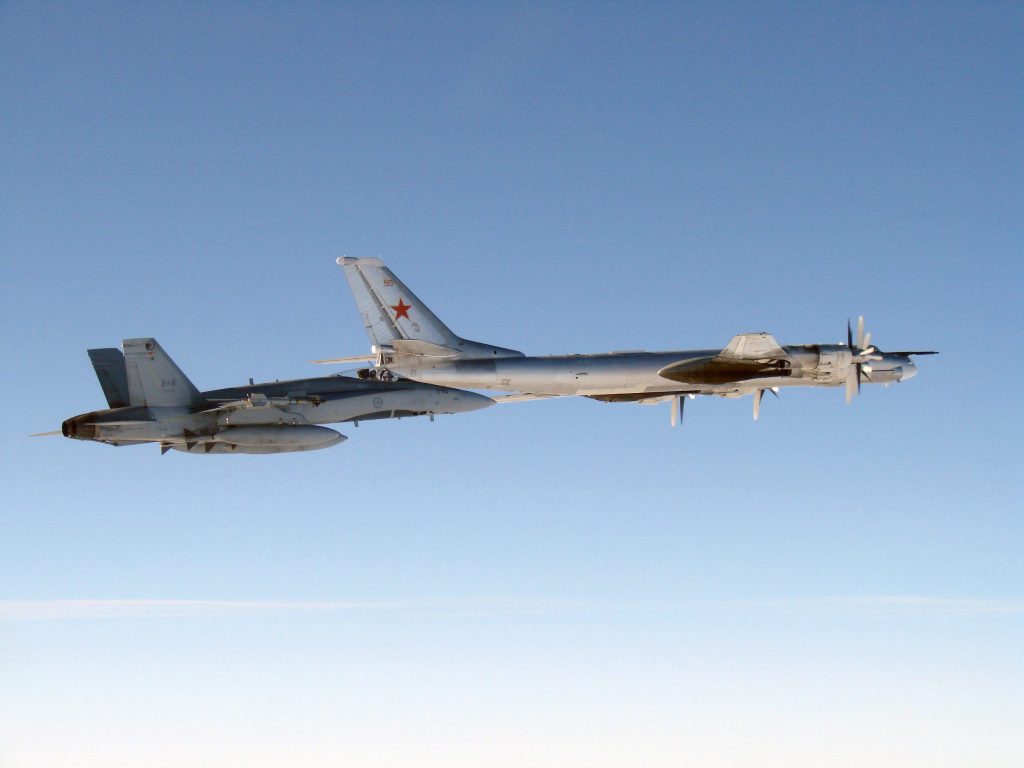 A CF-18 Hornet (left) from 4 Wing Cold Lake flies next to a Russian Tu-95 Bear bomber on Sept. 5, 2007. A former Cold War visitor has returned. Russian bombers are again probing deep into Arctic airspace, forcing Canadian fighter pilots to rush up to greet them. One military analyst says it’s all part of the Russian effort to re-establish itself on the world stage, especially in the Arctic. THE CANADIAN PRESS/HO-Department of National Defence

While Moscow doesn’t seek a military confrontation in the Arctic, geopolitically Russia has the ability to become a regional hegemon in the circumpolar world, Huebert said.

“The problem is when you have an increasingly aggressive and assertive regime who’s willing to use military force elsewhere but they have a regional hegemonic control, you get a spillover effect that becomes unpredictable until it occurs,” Huebert said.

That hegemonic power would give Russian authorities the ability to respond in the Arctic, where their military resources outmatch those of their neighbours, to challenges to their interests elsewhere in the world, Huebert said.

“Go ask the Finns, the Swedes and the Norwegians,” Huebert said. “Every single time that either something about the Baltics, or Syria, or any of those other regions start causing differences between the West and Russia what do the start doing now? And of course the answer is they start the overflights, they start the maritime incursions, they start the clear military violations of all the Nordic counties’ air and maritime spaces.”

Russia’s Ambassador to Canada Alexander Darchiev was not available for interview, but Russian officials insist that the country’s buildup of its military is in direct response to NATO’s continued expansion along Russia’s western and southwestern flanks, which started long before the Ukrainian crisis.