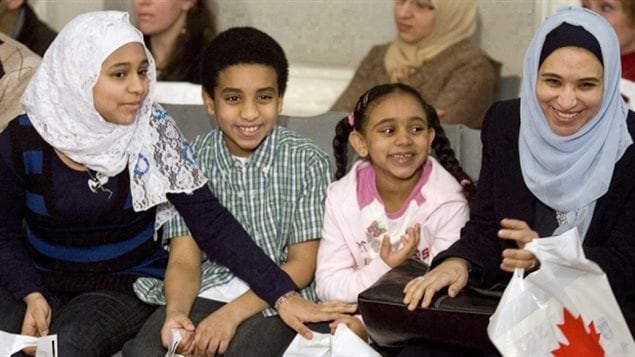 Immigration increased last year in the Atlantic provinces, partially due to the many privately-sponsored Syrian refugees that arrived.
Photo Credit: CBC

Immigration increasing in the Atlantic provinces

Immigrants to Atlantic Canada have tripled since 2002. In 2015 there was a record influx of 8,300 people. Last year the total increased to 11,600 but some of that was due to the arrival of the Syrian refugees.

This week the Atlantic Provinces Economic Council (APEC) released a report on these positive trends, with projections of as many as 19,000 people choosing to move to the region in the future.

“As long as you’re in one of these priority occupations, based upon our labour market analysis, then we think you have a good chance of succeeding here in the region.”

Canada takes in approximately 250,000 immigrants annually, most of whom settle in the regions around the big cities of Toronto, Vancouver and Montreal. But with the use of Provincial Nominee Programs, the Atlantic provinces are succeeding.

Immigration is crucial to the future of eastern Canada. Between the number of deaths exceeding the number of births, and the out-migration of so many of the young people, the net population growth is going to be flat.

“Firms having to replace retiring workers are struggling to find enough individuals in the region, and many of our new businesses, particularly in the technology field, they need individuals who have specialised skills, who have exprience.” Chaundy says.

He provides a recent example: “It’s a small technology firm that’s got a brand new service that their offering. They’re able to hire some new graduates out of the local university who are very talented but they don’t have the experience they need. So they have been trying, and it’s been taking them a while, to bring in an individual from the UK who has a PhD, who has lots of experience. That individual will be a great asset to this company. He will also help to mentor and train some of these young local hires and help that business succeed and grow and expand and employ other local people.”

Chaundy says this is how immigrants are really making a difference. This past July, the federal government announced a pilot program to help increase immigration to the four provinces. It will allow the region to accept up to an extra 5,000 people.

The details have yet to be worked out, but it will be an employer-driven program and include the employees families. It will also be an opportunity to test out some new approaches to improving retention, to help people settle and stay in the area.

These provinces, New Brunswick, Nova Soctia, Prince Edward Island, and Newfoundland and Labrador, have been using the nominee programs to better respond to their individual needs.

Chaundy says it differs by province, but some people are coming to New Brunswick, for example, under the entrepreneurship category which allows them to buy businesses.

Others come under the highly skilled category which can include people in management, health care and engineering. And some programs have developed low skilled categories to respond to the local needs in areas of manufacturing and retail or the service sector.

“As long as you’re in one of these priority occupations, based upon our labour market analysis, then we think you have a good chance of succeeding here in the region.” Chaundy says.