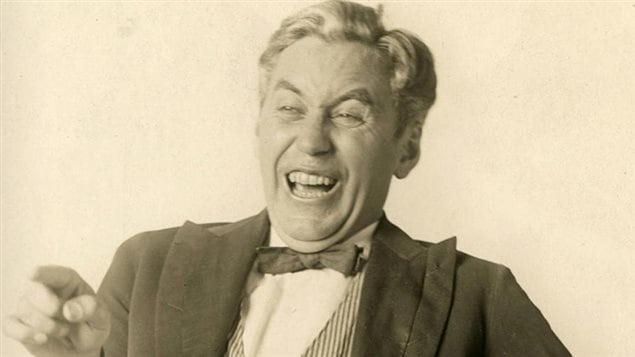 (to comment on any RCI story, scroll down to very bottom of page)

He was known for many years throughout the U.S. as “the King of Comedy”, except, he was Canadian.

Charlie Chaplin, W.C Fields, Harold Lloyd, Gloria Swanson, and so many more built their careers through work with him.

A whole series of slapstick comedy films involved the Keystone Kops. In fact even today, the term Keystone Kops might still be heard to refer to some bumbling or bungled situation.  Custard-pie throwing,  bearded villains, bathing beauties, crashed cars, falling off cliffs, out of buildings and so on, were all common fare and popularized by Sennett at his Keystone Studios and later Triangle Films and still later Mack Sennett Comedies, all in California.

Indeed traces of Sennett’s gags and chases and other set-ups can still be seen in films today, all of which owe a tip of the hat to the ground-breaking filmmaker, Mack Sennett, who was born on this day, January 17, 1880, in Richmond in the Eastern Townships of Quebec.

His real name was Michael Sinnott, son of an Irish-Catholic labourer and later inn-keeper.

At age 17, the family left for the U.S, and “Mack” who wanted to be an opera singer started out as a labourer there but quickly gravitated to the entertainment scene eventually ending in New York City.

He worked in a variety of jobs from back up chorus singer, to burlesque, to circus, to Vaudeville, and finally ended up with Biograph Films as an actor.  He quickly rose to directing comedies after learning from D.W. Griffith, who passed direction on to Sennett as he felt comedies were somewhat beneath him.  Within three years of entering Biograph, Sennett, backed by two investors, was off to Los Angeles to form his own company.

He quickly developed a slapstick style, and amassed a pool of talent involving names who themselves would later go on to become legend. Charlie Chaplin developed his “little tramp” character while under Sennett’s direction and within a year, was off on his own towards fame and fortune.  WC Fields was also among Sennett’s finds.

The stock market crash however, almost brought Sennett to ruin, although he did manage to struggle through and indeed transition into the “talkies” period.

However, after about 1,000 films, times and tastes had changed and by the mid thirties the legendary filmmaker had basically retired although he would still occasionally make cameo appearances on TV decades later.

Canadian Mack Sennett, the King of Comedy who had so helped developed the Hollywood film industry, died at age 80, on November 5, 1960 in Los Angeles.