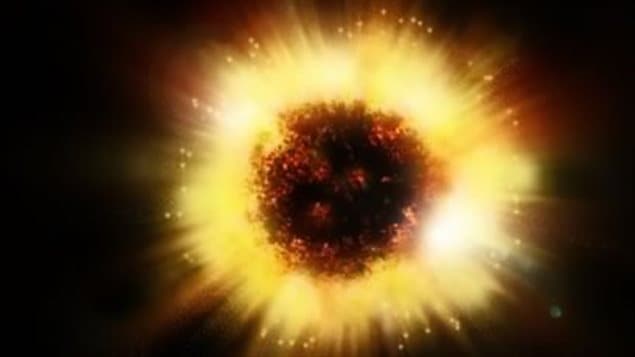 An international team of astrophysicists from Canada, the UK, and Italy has come up with a new theory to explain the Big Bang and early universe..a hologfaphic theory
Photo Credit: via CBC

The universe is holographic.

You’ll likely have to be patient on this one, unless you’re an astrophysicist or knowledgeable in things like quantum mechanics.

Niayesh Afshordi is co-author on a new paper which suggests a better mathematical way to understand the formation of the universe that may lead to a new understanding of the Big Bang theory and quantum gravity.

The idea doesn’t do away with our 3-D view of the universe, but holds that the beginning of the universe is better explained by holographic theory, where you remove one of the dimension, or perhaps instead, the fourth dimension, time.

Professor Afshordi says it’s something like viewing a 3-D image on a 2-D flat screen.  He is an associate professor of physics and astronomy at the University of Waterloo, and associate faculty in gravitation and cosmology at the Perimeter Institute for Theoretical Physics, also in Waterloo, Ontario.

The new concept was developed by a team of theoretical physicists and astrophysicists from Canada, the U.K and Italy.

The theory was published in Physical  Review Letters with the title, “From Planck Data to Planck Era: Observational Tests of Holographic Cosmology”

Although it ceased operation in 2013, the authors used newly available technology, to study data collected by the Planck space telescope. This telescope was able to map out cosmic microwave background (CMB) radiation which presents as residual heat from the Big Bang of 14 billion years ago.

This radiation spreads outward in all directions but is not uniform. The scientists were able to measure the tiny variations with great accuracy. Those deviations encode the physics of the very early universe. Researchers then applied their holographic theory to the  deviations and, they agreed very well.

Another way of explaining the theory comes from one of the co-authors,  Professor Kostas Skenderis of Mathematical Sciences at the University of Southampton, in England who explains it this way, “Imagine that everything you see, feel and hear in three dimensions (and your perception of time) in fact emanates from a flat two-dimensional field. The idea is similar to that of ordinary holograms where a three-dimensional image is encoded in a two-dimensional surface, such as in the hologram on a credit card. However, this time, the entire universe is encoded”.

Professor Afshordi says that Einstein’s Theory of Relativity explains large-scale things very well, but doesn’t work well at the quantum level, such as the beginning of the universe and the big bang. Quantum theory is the opposite and researchers have been trying to reconcile the two for decades.

He says this new theory simplifies the theory of the early universe, and helps to reconcile the two physics theories,  while co-author Skenderis says, it’s a new paradigm for physical reality.

Professor Afshordi says it gives science a new language and new tool to understand the physics of the universe. Afshordi points out that in science, new tools and language leads to new technology, but as to where these new tools might lead is very hard to know.