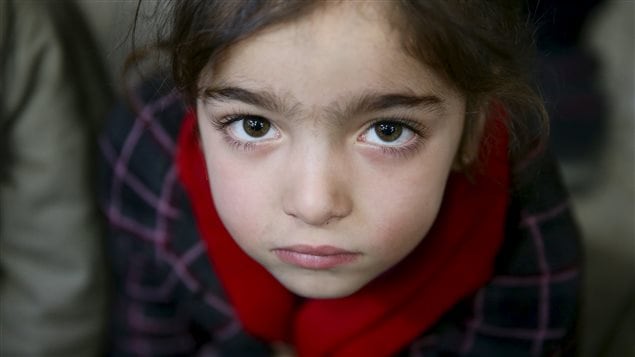 Gharam, 5, an orphan, attends a gathering organized by Damascus Lovers, a group that helps with social support for orphans, in Harasta, in the eastern Damascus suburb of Ghouta, Syria January 30, 2016.
Photo Credit: Bassam Khabieh / Reuters

Even as the focus of the Western media attention has shifted away from Syria, the situation remains very dire in many parts of the war-torn country and nearly six million Syrian children are in desperate need of assistance, say officials of the United Nations children’s agency.

“After five years of war, of course, people’s resources are strained,” said Genevieve Boutin, a French-Canadian who leads UNICEF’s Humanitarian Affairs work for the Middle East and North Africa. “There is 5.8 million children today who are dependant on humanitarian assistance to get what they need to survive on the daily basis: be it food, be it nutritional assistance, vaccines, clean water, access to school and other fundamental needs.”

(click to listen an edited version of Genevieve Boutin’s interview)

UNICEF is unable to reach over 300,000 children who are caught up in fighting in areas that the agency has no access to, said Boutin in a phone interview from Amman, Jordan.

There is fighting going in the northwestern Idlib province near the Turkish border, where opposition groups are fighting each other and the government forces and their Russian allies, Boutin said.

About 36,000 people who had fled eastern Aleppo and joined other Syrian refugees in Idlib are now caught up in that fighting accompanied by intense air strikes.

“Much of what we saw in Aleppo last fall is unfolding there,” Boutin said.

There is also fighting in the south of the country in the governorate of Daraa and in eastern Syria, around the so-called Islamic State stronghold of Raqqa and in Deir-ez-Zor.

“What it means is that children still have to leave their places of refuge, some of them are moving for the second, third time,” said Boutin.

About 1.7 million children are not attending school in Syria right now because either the schools are not accessible, or it’s too insecure, or in many cases children have to work to help their families, Boutin said.

In fact, schools continue to be under attack and UNICEF documented 87 attacks on schools and education personnel last year, she said.

“Every year we think it can’t get worse and it does get worse on indicators such as the number of children who are recruited and used by armed forces and groups unfortunately the situation is deteriorating,” Boutin said.

As the fighting continues, there are fewer adults available to fight and more and more children at a younger age are being recruited by various armed groups, she said.

“Kids are being killed and maimed because of the tactics used by the parties that are simply not good enough in terms of discriminating between civilian and military targets,” Boutin said. “And they keep hurting civilians by attacking hospitals and attacking schools.”

As the warring parties gather in Geneva for peace talks, one of the first things they need to commit to is not to target civilian infrastructure, she said.

“This is our and your opportunity and a solemn historic responsibility”
– @UN Envoy de Mistura to the participants of #SyriaNegotiations pic.twitter.com/u6M6XAfcIU

Unfortunately, it seems the trend in the beginning or 2017 is pretty dire as well, she added.

“The situation in Syria remains extremely, extremely difficult,” Boutin said. “And the prospects for peace, the cessation of hostilities that’s been announced has held in some parts of the country but the truth is that most children in Syria are still waiting to see the dividends of that.”