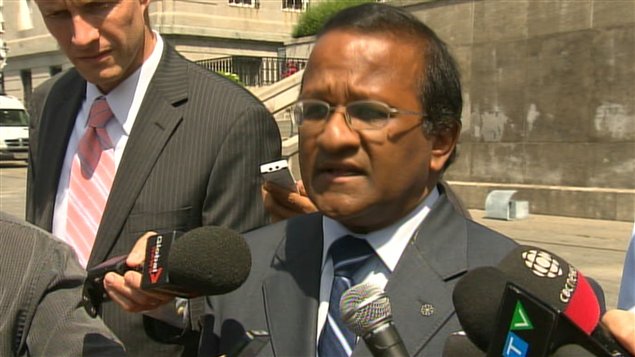 Alan DeSousa says the Liberal Party has not given him any explanations as to why it rejected his candidacy for nomination in the riding of Saint-Laurent
Photo Credit: CBC

The federal Liberal party has blocked the candidacy of a well-known Montreal municipal politician in a heated nomination battle to represent the Liberal stronghold of Saint-Laurent in the upcoming federal by-election on April 3.

Alan DeSousa, mayor of the borough of Saint-Laurent, told reporters Tuesday that he has been informed by party officials that his name would not be on the ballot at the coming Liberal nomination meeting for the federal electoral district of Saint-Laurent, which largely shares the same boundaries as the borough.

DeSousa said the party’s “green-light committee,” which conducts background checks on candidates, did not provide any explanation for his rejection and called on the party brass to quickly reverse the ban.

“The party has to wake up and smell the coffee,” DeSousa said, speaking to reporters outside the borough city hall. “Let’s be very clear, the whole process is kind of opaque.”

The Liberal Party refused to provide more information about its decision to bar DeSousa from becoming a potential candidate.

“For reasons of confidentiality, the party cannot discuss the details of a particular file,” a Liberal spokesperson said in an email.

Former provincial Liberal minister Yolande James, seen by many insiders as the party hierarchy’s favourite, and Marwah Rizqy, a tax law professor, have already been approved by the selection committee.

Saint-Laurent is one of the safest Liberal ridings in Canada and until recently has been represented by former Foreign Affairs Minister Stéphane Dion. The veteran politician and one time Liberal Party leader resigned from his position as a Liberal MP after he was unceremoniously shuffled out of the cabinet in January.

DeSousa, borough mayor since 2001, was among the first to express an interest in running to replace Dion.

The decision to block DeSousa’s candidacy in the nomination race comes as the party brass faces criticism for parachuting  a senior Liberal staffer Mary Ng into another “safe” Liberal riding, in a by-election in the Toronto suburb of Markham-Thornhill.

Five by-elections, including those in Saint-Laurent and Markham-Thornhill, will be held around the country on April 3 to fill in vacant seats in the House of Commons.