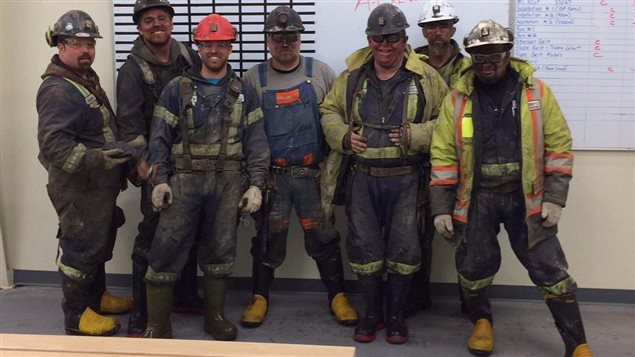 Coal miners at the Donkin Mine are shown in a handout photo provided by Neil Mackinnon. Absent for almost a generation, a way of life has returned to Cape Breton. Underground coal mining, once the backbone of the island's economy, resumed at the Donkin Mine late Monday as the members of A-Crew began cutting the black fossil fuel from a tunnel that extends out four kilometres under the Atlantic Ocean.
Photo Credit: PC / Neil Mackinnon

Coal miners are back at work ‘down under’ in Donkin, on Cape Breton Island in the province of Nova Scotia.

The Donkin Mine is near one of the oldest in North America, having opened in the 18th century. At one point it supplied the Fortress of Louisbourg.

But for the last 15 years mining operations at Donkin had been suspended. Yesterday the first shift began work again, with 64 people currently employed. That number is expected to increase as production gets going.

“After two years of hard work and planning by our employees, many other supportive constituents and the Nova Scotia government, coal is being produced once again in Cape Breton,” Paul Vining, CEO of Cline Group, said in a news release. Cline Group is the parent company of Karmeron Coal Management.

“This Cape Breton coal is some of the highest quality thermal and metallurgical coal in the world and we look forward to strategically marketing this product both domestically and internationally,” according to the release.

For some of the residents of Cape Breton, the mine reopening is good news. It will provide much-needed employment in the region. For others, particularly those in the environmental movement, this is a step backwards.

Gretchen Fitzgerald, National Program Director with the Sierra Club of Canada, says she was devastated when she heard the news this morning. She had participated in a consultation on coal mine effluents last week, and had the impression there were more steps the operator had to take before resuming production.

“The operation of the mine itself, regardless of the burning and the emissions associated with that, will have significant, make a significant contribution to provincial greenhouse gas emissions.” Fitzgerald says.

There were concerns raised locally about the transportation of the coal; by truck the impact on local roads, the safety elements and the coal dust in the air are issues, and by ship, the possible impact on marine life and the fisheries would also have to be taken into consideration.

“So again, hearing that this mine had opened and not knowing which options are being, have been approved, is pretty disheartening.”

Nova Scotia has earned a reputation over recent years as one the leaders in greening their economy. With investments in the renewable energies of solar, wind and tidal power, reopening a coal mine brings the trend to a halt.

Canada produced 62 million tonnes of coal in 2015 for both metallurgical use and power generation.

There are currently 26 mines, across Canada, 18 in production and 6 with suspended operations. They’re located in the provinces of British Columbia, Alberta, Saskatchewan and Nova Scotia.

In British Columbia there are 14 additional coal mine projects currently undergoing assessment.