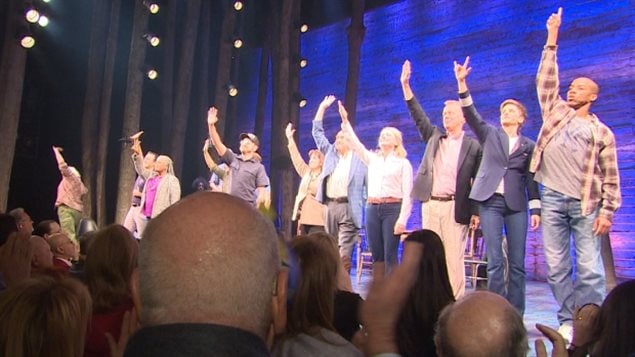 The cast of Come From Away take a bow to an Opening Night standing ovation at Broadway's Gerald Schoenfeld Theatre Sunday in New York.
Photo Credit: CBC / Darryl Murphy

Canadian musical opens on Broadway to much applause

As Newfoundland and Labrador residents were digging out from a fierce winter storm on the weekend, a play about the province’s famed generosity of spirit opened Sunday night in New York on another Great White Way: Broadway.

It’s called “Come From Away” and its a musical about how the people of Gander found ways to comfort and care for 7,000 stranded airline passengers who landed in the city of 10,000 when U.S. airspace closed after the terrorist attacks of Sept. 11, 2001.

Opening Night was marked by tears and laughter among many of the former stranded passengers and many from Gander who were in attendance.

And if last night was any indication (it may or may not be since First Night audiences are usually stacked with friends and supporters) the show has a shot of surviving in the rough and tumble world of Broadway musicals.

The final number had the crowd on its feet with many members of the audience weeping and clapping.

The play was written by Canadian playwrights David Hein and Irene Sankoff who were living in New York during 9/11. They interviewed residents of Gander at the 10th anniversary making the fall of the Twin Towers.

There is only one cast member from Newfoundland and Labrador. Patricia Bromley plays a number of characters, including SPCA manager Bonnie Harris.

Romano De Nillo, who is from the province, plays in the band.

Prime Minister Justin Trudeau and his wife, Sophie Grégoire Trudeau, are scheduled to attend a performance on Wednesday.