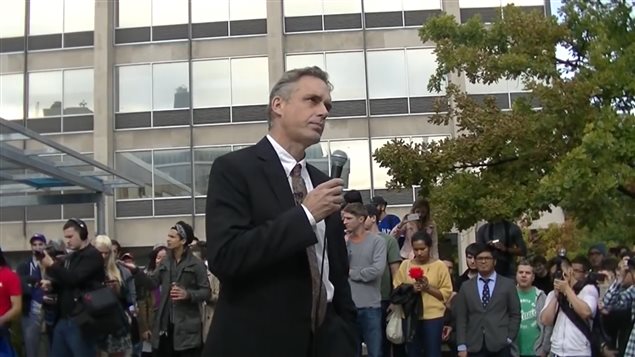 Psychology professor Jordan Peterson attempting to address a crowd at the University of Toronto where a small group of protesters of the LGBT community tried to shout him down and eventually broke the sound equipment. Universities have begun charging student groups *security fees* when they invite unpopular speakers holding non-politically correct views.
Photo Credit: Youtube

It seems the once open attitude on university campuses where a variety of controversial opinions could be discussed and debated, is changing.

When student unions invite controversial speakers, universities have begun imposing hefty “security” fees on them. If students can’t afford the fees, or choose not to pay, it blocks the controversial event from taking place.

It’s imposing a financial chill on freedom of expression according to many.     John Carpay (B.A.,LL,B) is president of the Justice Centre for Constitutional Freedoms. (JCCF), a non-profit legal organization based in Calgary specializing in Canadian constitutional law, specifically in interpretations of the Canadian Charter of Rights and Freedoms

The JCCF has begun looking into this issue. They’ve pointed out several instances where potentially controversial speakers or situations have been shut down by these new charges by universities.

The institutions say it’s to protect themselves in the case of damage from protestors who are likely to disrupt the event(s).

Carpay says the universities are targeting the wrong people, the victims of abusive protests, rather than the small group of disruptive protesters.

Such fees have been applied to a men’s awareness group at Toronto’s Ryerson University when they wanted to host a discussion, although in that case the $1,600 fee was subsequently withdrawn in the face of a public backlash.

In another case a “pro-life” group at the University of Alberta was charged $17,500 if they wanted to put up a stationary display for a couple of days.

Western University has charged another student group $1,000 for an event they hosted with University of Toronto professor Jordan Peterson who has become the target of abusive protests by radical elements of the Lesbian,gay,bisex, transgender,queer (LGBT) community.

The JCCF is asking Western to refund the payment to the student group.

Carpay also notes there have been cases where universities have distanced themselves or even publicly chastised professors who have expressed controversial or unpopular positions. He notes however, that the security fees, and/or distancing or criticism of professors seems to apply only to controversial opinions that don’t fit with current attitudes of political correctness.

Carpay fears that this chill by university leaders will likely get worse before it gets better.