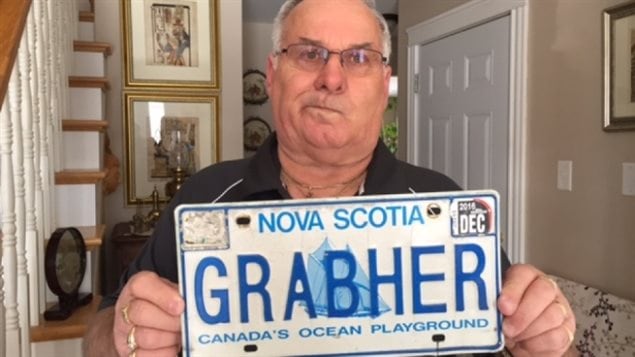 The provincial government in Nova Scotia says it is standing by its decision to revoke Lorne Grabher’s personalized licence plate featuring his last name, even if the province has to go to court over its actions.

Provincial Transportation Minister Geoff MacLellan said Thursday the decision to revoke the plate – made following a single complaint – is in the best interest of Nova Scotians.

Speaking to reporters following a regular cabinet meeting in Halifax, MacLellan defended the actions of the Nova Scotia Registry of Motor Vehicles and ruled out interfering in the process.

(click to listen to Geoff MacLellan responding to reporters’ questions)

Graber says he is ready to launch legal action against the provincial authorities to get the plate – proudly featuring his German surname – back on his car. Under the provincial rules, vehicle owners in Nova Scotia can apply for personalized licence plates – also referred to as “vanity” plates – instead of having a combination of letters and numbers.

The problem is that, in the minds of some Nova Scotians and officials of the provincial Registry of Motor Vehicles, Grabher’s last name is now associated with U.S. President Donald Trump’s infamously crude remarks about being able to grab female genitalia without any consequences.

Grabher wrote in a Facebook post that he was notified by the director of road safety in the provincial Registrar of Motor Vehicles in December that his licence plate is being cancelled because it can be misinterpreted “as a socially unacceptable slogan.”

“The name on the plate was my last name ‘Grabher’ and [the license plate] has been in the family for over 25 years,” he wrote. “This plate changed hands within the family three times with no issue, but because one complaint was lodged, Ms Director of Road Safety used her authority to cancel my plate.”

Provincial spokesman Brian Taylor told Radio Canada International that Nova Scotia’s Department of Transportation felt compelled to act after receiving a complaint outlining how some people interpret the name as misogynistic and promoting violence against women.

“In this specific case, while we understand it is a last name, that context is not available to the general public,” Taylor wrote in an email. “With no way to denote that it is a family name on the plate, the department determined it was in the public’s best interest to remove it from circulation.”

Grabher denounced the decision as a “total abuse of power.”

“Where does it state that my last name is considered a “slogan” in the Motor Vehicle Act?” Grabher wrote in a desperate Facebook post that garnered international media attention.

Taylor said the province did not take the decision lightly and understands Grabher’s frustration. “We offered to print alternative wording or to reimburse him for the cost,” Taylor said. “These offers continue to be open to the individual.”

Grabher, who is retired, has been receiving dozens of supportive messages from across the world.

He has retained the services of the Justice Centre for Constitutional Freedoms in Alberta.

Grabher’s son lives in that Western Canadian province and has had no problem putting the family name on his license plate.

The centre has sent a letter to the Nova Scotia government calling the decision to revoke Grabher’s licence unconstitutional and “an affront to the dignity of Canadians, particularly those Canadians who are not of Anglo-Saxon descent.”

“Pandering to an unreasonable complaint and cancelling our client’s plate perpetuates misunderstanding, subverts the dignity and heritage of our client and many other Canadians, and violates the freedom of expression protected by the Charter [of Rights and Freedoms],” Carpay added.