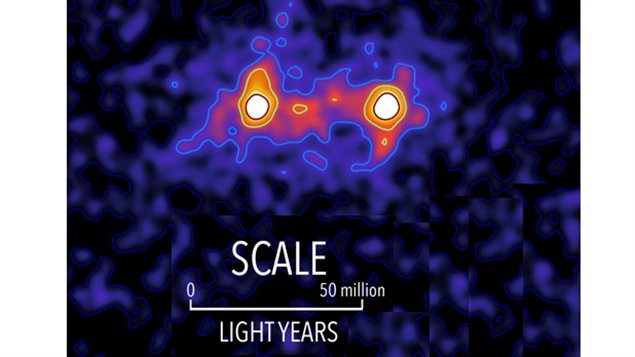 The mystery of “dark matter” ever so slightly illuminated.

The workings of the universe are so much mystery. One of the relatively recent discoveries or determinations was the presence of some mysterious entity occupying space. It was called dark matter in part because of its mysterious properties.

Two Canadian researchers have managed to capture the first composite image of a dark matter bridge that connects galaxies together.

Michael Hudson (PhD) Professor of Astronomy at the University of Waterloo in Ontario.

Dark matter is out there in space, in fact it comprises about 25 per cent of the universe. But in terms of its mysterious properties, it doesn’t shine, absorb or reflect light. It is largely undetectable except for the fact that it tends to bend the path of light through a process known as “gravitational lensing”.

Hudson and lead author graduate student Seth Epps’ research appears in the Monthly Notices of the Royal Astronomical Society is published under the title, “The weak-lensing masses of filaments between luminous red galaxies”. (available HERE)

While it was theorized that dark matter was denser around galaxies, and that galaxies were connected by “bridges” of dark matter, the Canadian researchers for the first time have established evidence of these bridges.

The effect was measured in images from a multi-year sky survey at the Canada-France-Hawaii Telescope.

In complicated computer programmes, they combined lensing images from more than 23,000 galaxy pairs located 4.5 billion light-years away to create a composite image or map that shows the presence of dark matter between the two galaxies. Results show the dark matter filament bridge is strongest between systems less than 40 million light-years apart.

Hudson says by if they can measure the distribution of dark matter, including these filaments, researchers can eventually determine its properties such as structure and mass and how and what it interacts with.  It’s yet another small step towards unlocking the mysteries of the universe.