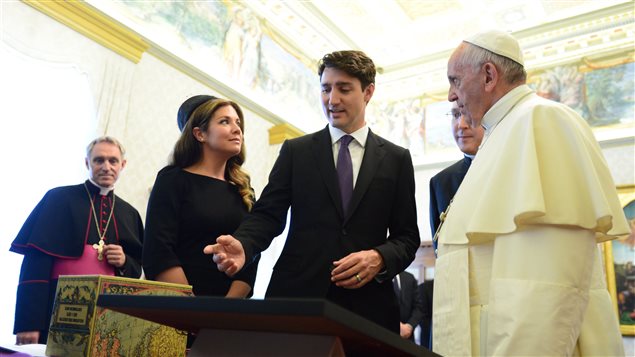 Trudeau and Pope Francis discuss reconciliation at the Vatican

The meeting between the pontiff and Trudeau, who was accompanied by his wife, Sophie Gregoire-Trudeau, was described as “cordial,” by the official Vatican statement.

Prime Minister Trudeau invited Pope Francis to visit Canada, according to the readout of the meeting released by the Prime Minister’s Office. Trudeau was expected to raise the issue of an official papal apology for the role of the Catholic Church in the now infamous Indian residential schools.

“Prime Minister Trudeau discussed at length Canada’s Truth and Reconciliation Commission’s Calls to Action,” said the statement released by the PMO, referring to the 94-point road-map to reconciliation.

The 58th recommendation calls upon “the Pope to issue an apology to Survivors, their families, and communities for the Roman Catholic Church’s role in the spiritual, cultural, emotional, physical, and sexual abuse of First Nations, Inuit, and Métis children in Catholic-run residential schools.”

It is estimated that more than 150,000 First Nations, Inuit and Metis children were separated from their families and forced into residential schools run by various Christian denominations over much of the last century in a deliberate policy to “take the Indian out of the child.”

Many of the children suffered horrific physical, psychological and sexual abuse at the hands of Catholic priests, brothers and sisters.

More than 3,200 Aboriginal children attending these residential schools died and were often buried in unmarked graves, according to the final report from the Truth and Reconciliation Commission, which called the policy of forced assimilation “a cultural genocide.”

“This will do much for healing and closure and will promote reconciliation between Canadians and First Nation peoples in Canada,” Bellegarde said.

“We will remain steadfast in our advocacy to the Pope for a statement of apology to the Residential school survivors, as well as the renunciation of the Doctrine of Discovery as an illegal and racist doctrine,” he added referring to doctrinal teaching that provided ideological and theological cover for the enslavement and dispossession of Aboriginal peoples of the Americas by the their Christian conquerors.

In 2009, the previous pope, Benedict XVI, did express “sorrow” on behalf of the Catholic Church for the “deplorable conduct” by some members of the church in their treatment of indigenous children in residential schools.

The Truth and Reconciliation Commission report said this did not go far enough, especially since it was not made in public.

The statement by the Vatican said two leaders discussed the contribution of the Catholic Church Canada’s social life of the country.

“The parties then focused on the themes of integration and reconciliation, as well as religious freedom and current ethical issues,” the statement said.

“Finally, in the light of the results of the recent G7 summit, attention turned to various matters of an international nature, with special attention to the Middle East and areas of conflict.”

Trudeau also presented Pope Francis with a Montagnais-French dictionary written by a French Jesuit in the 17th century.

In return, the Pope gave the prime minister a gold medal marking the fourth year of his pontificate, an autographed copy of his message for World Peace Day and three papal letters about family, environment and evangelism.​