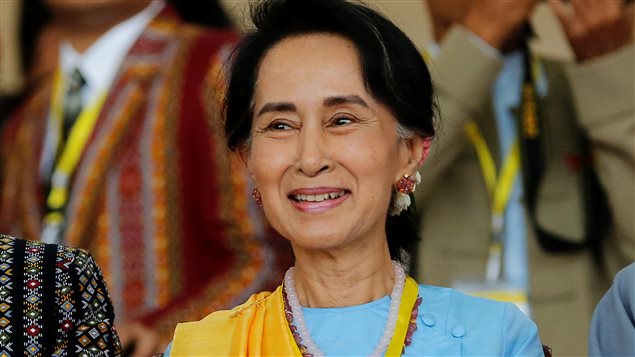 When Prime Minister Justin Trudeau greets Myanmar’s de facto leader and honorary Canadian Aung San Suu Kyi next week, he needs to pressure her to protect the Rohingya Muslim minority, which is facing genocide and crimes against humanity in the northwest of the country, says a Canadian genocide expert.

Kyle Matthews, executive director of the Montreal Institute for Genocide and Human Rights Studies (MIGS) at Concordia University and a Fellow at the Canadian Defence and Foreign Affairs Institute, says Suu Kyi’s five-day visit to Canada is a unique moment for Trudeau press the Nobel Peace Prize winner to do more to protect the stateless minority.

“It’s a very opportune time for the Canadian government to host her but realize that there are some severe human rights violations going on and Canada should not be quiet about it but should actually pressure her when she’s here,” said Matthews.

The Prime Minister’s Office announced Friday that Suu Kyi, whose official title is State Counsellor of the Republic of the Union of Myanmar, will visit Canada from June 5 to 9, 2017.

Suu Kyi is travelling to Canada to consult Trudeau on constitutional reforms. Her visit to Canada follows fresh round of peace talks in the capital Naypyidaw aimed at ending a conflict in Myanmar’s troubled frontier regions, where various ethnic groups have been waging war against the state for almost seven decades.

Trudeau will meet Suu Kyi on June 7 to “discuss federalism and democratic reforms in Myanmar, as well as regional peace and security and the importance of promoting democracy, good governance and human rights,” according to the Prime Minister’s Office.

The Rohingya, who number about one million, have lived in Myanmar, also known as Burma, for generations.

However, many in Myanmar’s predominantly Buddhist population view them as foreign intruders from neighbouring Bangladesh.

The persecution of Rohingya has been going on for a long time, Matthews said. Attacks against the Rohingya in Rakhine State along the border with Bangladesh came into the forefront in the last four-five years before Suu Kyi took power, he said.

“In the past couple of years we have seen different Buddhist monks actually become very open and loud in using their pulpits to spread hate and ask for the masses in Myanmar to attack the Rohingya,” Matthews said. “We’ve had civilians taking up weapons and arms to attack Rohingya and we’ve had almost sectarian strife between the Rohingya and the Buddhist population.”

Muslim mobs have also attacked Buddhist temples and villages in Rakhine and in neighbouring Bangladesh.

The most recent spate of fighting began in October last year, when nine Buddhist Burmese border guards were attacked and killed.

Dozens of Rohingya villages have been burned to the ground, women have been raped and civilians murdered by the army, Human Rights Watch reported in late 2016. At least 10,000 Rohingya have fled across the Bangladeshi border to escape the violence.

The government has placed thousands of Rohingyas in internment camps, in places where they can’t interact with anyone else and don’t have the freedom to travel, he said.

“There have been deportations, there have been mass killings,” Matthews said. “What has happened with Rohingya is a series of targeted human rights abuses against one particular group with the aim or partially destroying the group or trying to make them leave the territory.”

However, the Burmese government has denied allegations of genocide and ethnic cleansing, rejecting any evidence to the contrary as “propaganda” and “fabricated news and rumours.”

When Suu Kyi took power after the 2015 elections, many in the international community and human rights organizations saw her as a beacon of light, someone who has fought against oppression and for justice, and fought for democracy, Matthews said.

However, many have been very dismayed that that she hasn’t made any strong public statements about what’s happening to the Rohingya and doesn’t seem to have done anything to help their plight, Matthews said.

“So it [persecution of the Rohingya] didn’t start on her watch, but she is now in charge and, having won a Nobel Peace Prize, it’s a little perplexing that she has not been more outspoken or done more to protect the Rohingya,” Matthews said. “I don’t know of any other Nobel Peace Prize winners who have gone on to govern a state committing genocide against a minority.”