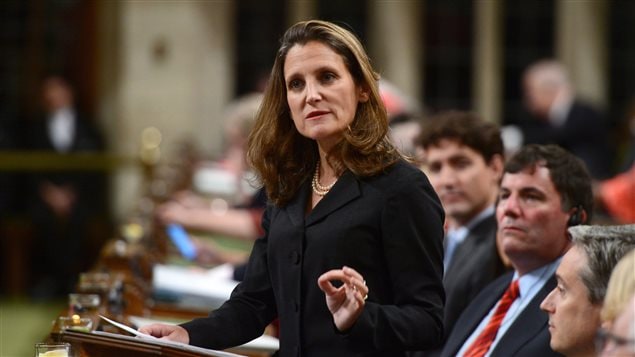 Speaking to reporters on the sidelines of the International Economic Forum of the Americas in Montreal, Former Progressive Conservative Prime Minister and Foreign Affairs Minister Joe Clark said he was very pleased Freeland made a point of delivering her foreign policy speech in the House of Commons.

(click to listen to the interview with Joe Clark)

Freeland was “very frank” about the unsettling changes in the world, he said.

The fact that a government minister was making such an admission indicates a capacity to look forward that is hard to find in many other places in the world, he said.

The international political system is undergoing a rapid and profound change, Clark said.

“We do not want to become too focused on what is happening in the U.S. despite its intensity, despite the difficulty of getting out of our minds, despite its importance to us,” Clark said.

A period of great unsettlement

Since the end of the WWII, we have become accustomed to things coming together, he said.

There is a period of great unsettlement, which means that people who are in charge of current policy have to take a look at what is the shape of this new world, what they can do and what assets does Canada have to meet these challenges, Clark said.

Canada is better placed to meet these challenges than some other countries and has a unique opportunity to play the role of a bridge between Europe and the United States once again, he said.

“There was a time when relations were unusually undeveloped between the United States and Europe, when NATO was first being formed, that Canada really was the Atlantic link,” Clark said. “Part of our role then was to ensure that there were no grievous misunderstandings between our North American neighbour and our European ancestors, if you will, the countries we came from.”

No naming or shaming

Ferry de Kerckhove, a former high-ranking Canadian diplomat, Senior Fellow at the Graduate School of Public and International Affairs at University of Ottawa, said he too was very encouraged by Freeland’s speech but cautioned that Canada should not overestimate its abilities as a world player.

“On a very positive side I find it a courageous one, which really says as it should without naming and shaming but we know where the shame and the name go,” said de Kerckhove.

(click to listen to the interview with Ferry de Kerckhove)

On the other hand, de Kerckhove said he detected some “electioneering” in Freeland’s speech.

“Fundamentally, the way the prime minister has managed the relationship with the U.S. has been remarkable in all respects,” de Kerckhove said. “On the other hand, I think there are a lot of Canadians who are wondering when are we going to take on that idiot down south.”

The Trump administration’s rejection of Paris Climate Accords seems to have been one of the decisive factors in the Trudeau government’s decision to stake out a more independent foreign policy stance that is much more in line with the views of many Canadians critical of Trump’s policies on the environment, multilateralism and trade, de Kerckhove said.

Canada is not a middle power

However, Canada has to be realistic about its abilities on the international scene, de Kerckhove warned.

“But what irks me because I’ve done it so many times in speeches that I’ve written for prime ministers and foreign ministers is this kind of pretense that Canada can nearly replace the U.S. on the international stage, that once again we’re going to punch above our weight,” de Kerckhove said. “We’ve never had some big contribution, we’re not a big player.”

Instead of the United States, on some of the issues Canada will know have to rely on its European allies Germany and France, but it’s highly unlikely that it will be able to achieve much on its own, de Kerchove said.

“What basically Mrs. Freeland is saying is that, OK, the next four years we’ll just have to ignore the guy down south, we’ll try to do our best, we’ll be multilateral,” de Kerckhove said. “But I’m still looking for the hardware that we are going to commit to.”