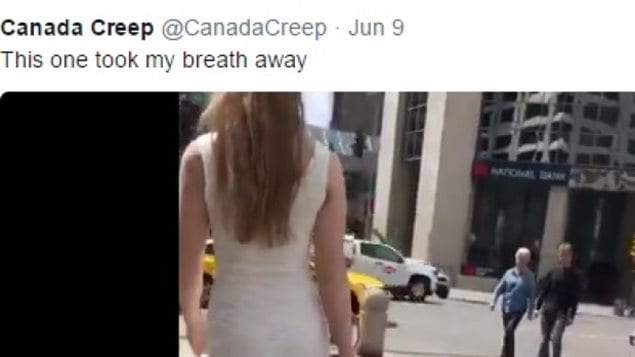 Alexandra Constantinidis said it felt ’violating’ when she learned she had been followed and recorded on video that was posted to the ’CanadaCreep’ Twitter account, which had amassed 17,000 followers in a year, before being suspended Tuesday morning. She agreed to have this screenshot of the video published as part of this story. (Twitter )

Police in the Western Canadian city of Calgary in Alberta have arrested a 42-year-old man in connection with a Twitter account that shared hundreds of surreptitiously recorded images of women’s clothed breasts, buttocks and genital areas — including videos filmed up women’s skirts.

The man is facing voyeurism-related charges in relation to three incidents, however the investigation is ongoing and more charges are anticipated, Calgary police said in a press release.

Officers arrested the man “without incident” at about 5 p.m. local time on Tuesday and seized “multiple electronic devices,” police said.

“A search warrant was executed on a residence in the community of Prestwick that resulted in an additional seizure of computers, storage devices and other electronics,” police said.

“Investigators are currently examining multiple terabytes of data, including hundreds of thousands of images, from numerous electronic devices that were seized. Officers are in the process of identifying victims and determining what electronic evidence is relevant to this case.”

The investigation into the “CanadaCreep” account was launched on Tuesday following numerous complaints.

Speaking to reporters on Tuesday Staff Sgt. Cory Dayley said some of the videos posted to the account are “clearly disturbing.”

“We take this type of activity very seriously and we initiated an active investigation looking into all the reports that are coming in, as well as proactively trying to identify people that have been victims of the crimes we’re seeing online,” Dayley said.

Surreptitious filming and posting of images without people’s consent would be classified as voyeurism even if it’s done in a public space, he said

“Anything that’s going to be underneath a layer of clothing would be considered an expectation of privacy in our minds,” Dayley said.

Dayley said it was alarming the account existed for almost a year before it was shut down.

“What’s extremely alarming to me, personally, is that this amount of content is out there and it has become this much of a social norm to people to not only see it, but just bypass it in their everyday searches online,” he said.

Alexandra Constantinidis, 22, learned on Monday evening she was among the women whose images were posted to the site.

“I was pretty mad that this was happening to me and also to a bunch of younger girls,” she told CBC News in Calgary.

“It’s a little violating having somebody film you when walking down the street.”

The case also prompted dozens of outraged Internet users to try to identify the person behind the account by analysing the footage that was posted for images of the perpetrator.

Vigilante Internet sleuths have been circulating several images in which the perpetrator appears to capture himself on video. In one such image it appears that the perpetrator is pointing the camera upward and seems to catch part of his own face in the frame. In another image his reflection is visible in a glass as he records a woman.