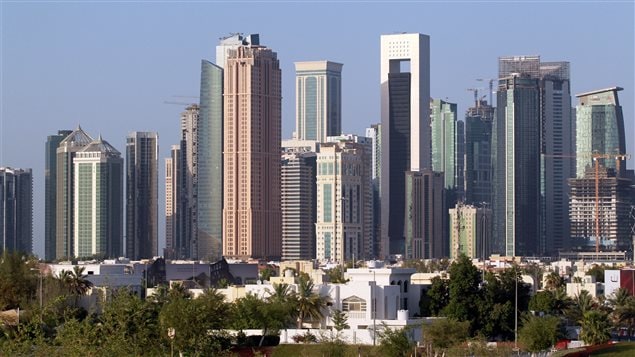 It’s the biggest diplomatic crisis to hit the Middle East in years.

Several Arab countries have announced that they are breaking diplomatic ties with Qatar.

The tiny, oil- and gas-rich state has been accused of supporting terrorist groups.

The dramatic move comes after years of tension between Qatar and its Gulf neighbours, in particular Saudi Arabia, which has closed its border, severing land, sea and air contact with the tiny peninsula.

To understand what is going on and what triggered this latest crisis between Qatar and its Gulf neighbours, I reached out to Thomas Juneau, an assistant professor at the Graduate School of Public and International Affairs at the University of Ottawa and a Middle East expert.

We discussed the role of some of the regional players such as Turkey, Iran, as well Russia and the United States. Juneau also talked about how the crisis might unfold in the coming weeks and months.

(click to listen to the interview with Thomas Juneau)

What are the underlying causes of this crisis?

Tensions between Qatar and its Gulf neighbours Saudi Arabia and the United Arab Emirates (UAE) are not new, says Juneau.

What has been happening in the last few weeks is the product of the accumulation of years of unresolved tensions, driven by multiple factors, he says.

“Qatar has been very busy, especially since 2011, since the onset of Arab uprisings but before that too, developing relations with basically everybody in the Middle East,” Juneau said. “They have been very careful to keep channels of communication open with an extremely wide range of actors: they talk to Israel, they talk to al-Qaeda, they talk to the Taliban, they talk to a range of Islamist movements – some of them extremists, others much more in the mainstream.”

The important point to keep in mind is that Qatar talks to these actors and does not necessarily give them material or financial support, Juneau says.

“It’s been a pillar of its foreign policy that it keeps channels of communications open with everybody, which among other things allows Qatar to position itself as a mediator in a lot of regional disputes,” Juneau says.

What’s the role of Turkey and Iran in this crisis?

“Turkey’s role has been interesting and I have to say I have been a bit surprised by how vocal Turkey has been in offering support to Qatar because Turkey does want to keep good relations with other players in the region,” Juneau says.

There are a number of converging interests between Turkey and Qatar, he says.

“Some of the actors – and I insist some of the actors, not all of them – that Qatar has been supporting in the region, especially since 2011, are actors that Turkey was also sympathetic to,” Juneau says.

That includes the Muslim Brotherhood and Hamas, both of which are considered terrorist organizations by Egypt, Saudi Arabia and the UAE.

While much has been said about the role of Iran in this dispute, the relations between Qatar and Iran are rather complicated, Juneau says.

Even Qatar’s minimally cordial relationship with Iran is enough to annoy its regional rival Saudi Arabia and the UAE, he says.

“But Qatar and Iran have a pragmatic relationship,” Juneau says. “It’s not alliance, they’re not particularly close and Qatar is extremely suspicious of Iran, and Qatar does not want to become a close ally of Iran and it’s been very clear about that.”

Qatar is happy to accept planeloads of food that Iran has been sending for the past two weeks, but that’s more symbolic than anything else, says Juneau.

What’s the position of the United States in all this?

The U.S. foreign policy has been pretty chaotic ever since President Donald Trump assumed power and this dispute between Qatar and its neighbours is another example of that, Juneau says.

“Trump has been tweeting and expressing on some occasions very clear support for Saudi Arabia but the rest of the U.S. government apparatus has been taking a much more nuanced position,” Juneau said. “Both Secretary of Defense Jim Mattis and Secretary of State Rex Tillerson have very clearly come out in very nuanced ways saying this dispute goes against U.S. interests in the Persian Gulf and we would really appreciated if the actors involved could sit down and resolve this in a peaceful manner.”

Washington has been very clear in saying that Qatar, which hosts a massive American military base that is extremely important for the continued U.S. operations in the region, is a very important partner.