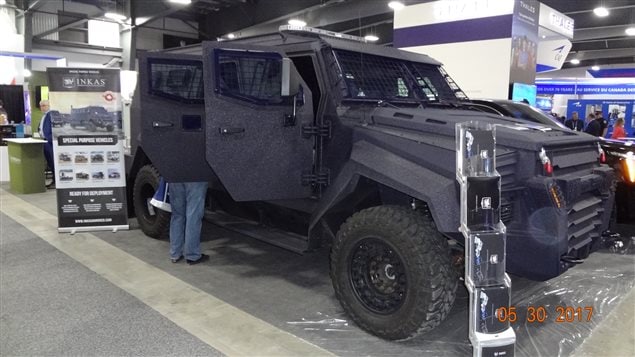 Toronto-based INKAS Armored Vehicle Manufacturing displays its Sentry Armoured Personnel Carrier at the CANSEC 2017 defence industry trade show in Ottawa on May 30, 2017. The company has signed a contract for the export of these APCs to Azerbaijan.
Photo Credit: Levon Sevunts

A deal by a Canadian company to export armoured personnel carriers to Azerbaijan and set up a joint production of these military-style vehicles in the oil-rich former Soviet republic is once again raising questions about the efficacy of Canada’s defence export controls.

The privately owned company has also set up a joint venture with an Azerbaijani firm to produce APCs in Azerbaijan, which has been embroiled in a simmering armed conflict with neighbouring Armenia since the breakup of the Soviet Union in the early 1990s, said Roman Shimonov, vice-president of marketing and business development at INKAS.

“Azerbaijan is a very unique country in terms of geographic location, in terms of geopolitical challenges, because they are in the middle between Iran and Armenia and Turkey,” said Shimonov, who has also been appointed CEO of the joint venture AZCAN Defence Solutions. “And they have resources, more resources than other countries, and they are looking to be able to have more solutions in terms of defence — and not only defence, they’re looking to protect their borders.”

Shimonov says the company has fully complied with all the government rules for the export of military goods.

“We cannot sell anything without getting a written permit from export control and once we get it, we know that our authorities, our Canadian authorities, have checked and they have approved,” Shimonov said.

Global Affairs Canada, the federal department responsible for issuing export permits for military and controlled goods, said “all applications for permits to export dual-use, military and strategic goods are assessed on a case-by-case basis, based on the specific goods and technology being exported, the destination country, and the specific end-use and end-user, amongst other criteria.”

“Regional peace and stability, including civil conflict and human rights, as well as the possibility of unauthorized transfer or diversion of the exported goods and technology, are actively considered,” said Global Affairs spokesperson Natasha Nystrom.

And yet the federal government granted INKAS permits for the export of APCs despite ongoing concerns over Azerbaijan’s poor human rights record.

“Canada and Azerbaijan benefit from cooperation on issues of mutual interest and concern,” Nystrom said. “However, we are concerned with the recurring crackdown on fundamental freedoms in Azerbaijan, particularly with respect to journalists and human rights defenders in the country.”

Groups such as Amnesty International and Human Rights Watch have criticized Azerbaijan’s human rights record and accused it of a “thorough crackdown on dissenting voices,” as well as persistent reports of torture and other ill-treatment perpetrated by its law enforcement agencies.

In November 2015, Azerbaijani police used Israeli-made armoured personnel carriers similar to those produced by INKAS in a controversial security operation that resulted in the death of six people and dozens of arrests in the town of Nardaran, about 30 kilometres northeast of the capital Baku.

The granting of the export permits also seems to contradict the government’s own export control goals that stipulate among other things that Canadian defence exports “do not contribute to national or regional conflicts or instability.”

In April 2016, tensions between Azerbaijan and Armenia once again erupted into an intense four-day war in contravention of a ceasefire signed in 1994. According to several experts, it appears the Azerbaijani military launched a surprise offensive against Armenian forces that control the breakaway Armenian-populated region of Nagorno-Karabakh and surrounding areas.

In addition, there are almost daily reports of clashes, sniper fire, artillery exchanges and commando raids along the entire line of contact between Armenian and Azerbaijani forces in the disputed region.

According to data collected by the Stockholm International Peace Research Institute (SIPRI) over the last two decades, Azerbaijan has spent over $30 billion of its oil wealth to rearm and retrain its military, purchasing high-tech weapons and munitions from Russia, Israel, Turkey, Ukraine and Pakistan.

And yet at the same time, Shimonov claims INKAS doesn’t produce military vehicles.

“We mostly focus on paramilitary and law enforcement solutions,” Shimonov said during an interview at the recent CANSEC defence industry trade show in Ottawa. “Our vehicles are not designed to provide any solution in the military field.”

However, that’s not what the company claims in its sales pitch on its own website.

“The INKAS Sentry APC is designed to be used by military forces, SWAT, and other law enforcement agencies all over the world,” reads the vehicle overview of its Sentry model APC.

“The INKAS Huron APC is a multipurpose tactical vehicle, which is able to protect its passengers in high threat environments within almost any climate condition. The vehicle is designed and equipped to operate in police and military tactical missions, convoy protection and border control all over the world,” reads the overview of its Huron model.

“AZCAN’s new ISR (intelligence, surveillance and reconnaissance) vehicle is armed with a Pitbull light remote weapon stations jointly designed by the Israel based companies IAI and General Robotics,” reads the description of the vehicle published in press release at the ADEX 2016 arms show in the Azerbaijani capital of Baku, where Shimonov presented the Sentry APC to President Ilham Aliyev.

The government needs to take a much closer look at the destination country’s general human rights record and the notion of risk and end use when it makes determinations on issuing export permits for military goods, Jaramillo said.

“Even if it’s on case-by-case basis, I think the general knowledge about problems in a certain country should be again an indicator which cases should merit more scrutiny than others, and I think that countries like Saudi Arabia, Azerbaijan, perhaps, fall into that category of greater scrutiny,” Jaramillo said.

“If the likely end use of any equipment going to Azerbaijan or anywhere else poses or triggers a certain risk, then the export we believe should not proceed.”