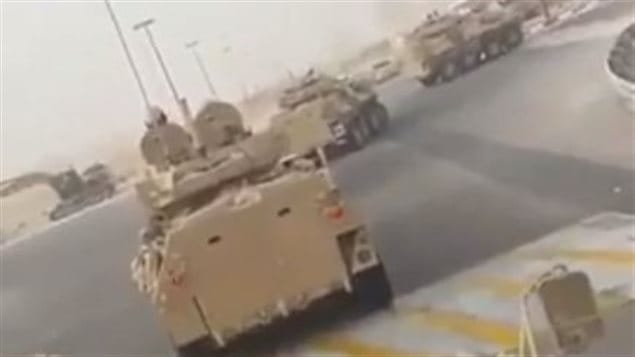 A still image capture from a video obtained by Radio Canada International purports to show a column of Light Armoured Vehicles (LAVs) produced by General Dynamics Land Systems - Canada being deployed by Saudi forces in a crackdown against Shia militants in the kingdom’s Eastern Province. RCI could not independently verify the authenticity of the video.
Photo Credit: Handout

New video footage obtained by Radio Canada International appears to show for the first time Canadian-made Light Armoured Vehicles (LAVs) being deployed by Saudi security forces in an operation to quash resistance by Shia militants in the restless east of the kingdom.

The nine-second video is putting additional pressure on the Liberal government to cancel a multibillion contract to supply the House of Saud with newer and more lethal models of these same vehicles.

The video was supplied to RCI by Saudi activists who claim that it was shot recently in Saudi Arabia’s Eastern Province in the Shia-dominated city of Awamiyah, which has been under siege by Saudi security forces since May.

RCI and CBC could not independently verify the authenticity of the video footage or its purported location. However, the video’s metadata suggests it was shot in May, just in the beginning of the operation in Awamiyah.

However, if true, the video offers the first evidence of Saudi security forces deploying these types of weapons systems in their crackdown on the Shia minority in the Sunni kingdom’s Qatif region.

Media attention so far has focused on the reported use by Saudi Special Security Forces of armoured personnel carriers (APCs) produced by another Canadian manufacturer, Terradyne Armored Vehicles in Newmarket, Ontario.

RCI and CBC reported two weeks ago that Terradyne Gurkha APCs were reportedly used by Saudi security forces in the fighting in Awamiyah, prompting calls for the government to suspend Terradyne’s export permits.

However, until today there was no evidence that the Saudi government was using LAVs in its crackdown in Awamiyah, which, according to unconfirmed reports by Saudi human rights groups, has killed between 20 and 30 people in the city and driven most of its population out.

In April 2016, despite numerous concerns raised by human rights groups over the possible use of these kinds of weapons against Saudi Arabia’s civilian population, the Liberal government approved a $15-billion deal to supply the Islamic Kingdom with hundreds of LAV 6.0 advanced combat vehicles, produced by General Dynamics Land Systems – Canada at their plant in London, Ontario.

The video obtained by RCI appears to have been shot by a Saudi soldier from the top turret hatch of a vehicle of the same family of combat vehicles as the LAV 6.0.

Military experts consulted by RCI and CBC have identified the vehicles in the videos as LAV 25s, an older model in the LAV family of vehicles produced in the 1990s and early 2000s. Saudi Arabia purchased hundreds of LAV 25 from Canada but also from the U.S. Marine Corps, which also used the vehicles.

It’s not clear whether the vehicles shown in the video were bought from Canada or the U.S.

A spokesman for General Dynamics Land Systems – Canada who was shown the video would neither confirm nor deny that the vehicles shown in the video are in fact LAVs, saying it was up to their “government customers to identify their vehicles.”

“General Dynamics Land Systems-Canada exports in full compliance with the laws of Canada,” Doug Wilson-Hodge, the company’s manager of corporate affairs, said in brief statement send to RCI and CBC.

Officials at Global Affairs Canada, the federal agency that deals with export permits for military, strategic and dual use goods, said they could not comment on the new video until its authenticity is confirmed.

But speaking to journalists on Monday, Foreign Affairs Minister Chrystia Freeland said she was concerned about the reports of Canadian military equipment being used in the crackdown on the Shia minority.

“I have instructed our department and my officials to very energetically and very carefully review the reports and review the information, and research what is happening,” Freeland said, speaking from Manila.

“We are absolutely committed to defend the human rights and we condemn all violations of human rights. We also are very clear that we expect end users of any and all exports to abide by the terms of our export permits.”

However, Global Affairs officials said their investigation focuses on the reports of Terradyne APCs and not the new reports of possible deployment of LAVs produced by General Dynamics Land Systems – Canada.

Conservative foreign affairs critic Peter Kent called on the Liberals to terminate export permits if there is “hard evidence” the Canadian armoured vehicles are being used against Saudi Arabia’s Shia minority.

He urged the government to act quickly.

“How long will it take to determine the facts, make a decision and share it with Canadians?” Kent said.

When the initial deal was signed by the previous Conservative government in 2014, the end-user conditions were contingent on Saudi Arabia not using the LAVs against its own civilian population, Kent said.

Daniel Turp, a professor of international and constitutional law who in March 2016 launched a legal challenge to force the Liberal government to cancel the multibillion deal and annul the export permits for LAV 6.0, said that if confirmed that the vehicles are in fact Canadian-produced and that they have been used to commit breaches of human rights in Saudi Arabia, the video could bolster his case against Ottawa.

Turp, a former Bloc Québécois MP and Parti Québécois MNA, had argued in court that the federal government’s decision to allow the export permits does not meet the legal requirements under the Export and Import Permits Act and the Geneva Conventions Act.

However, in January 2017 the Federal Court sided with the government. Justice Daniele Tremblay-Lamer ruled that the court could not “pass moral judgement” on the decision by then-foreign affairs minister Stéphane Dion to issue export permits allowing the deal.

“What we need to prove before the Federal Court at the appeal level now is that there is a reasonable risk that military equipment like these vehicles breach human rights,” Turp said Tuesday. “This video, other videos that show other vehicles that were built in Canada or built by a Canadian company this could help very much our case.”

Turp said he is ready to argue the case as early as in September.

“In view of these new facts and evidence that there is a reasonable risk, I’ve sent a formal notice to the minister of foreign affairs to just cancel the export permits that were delivered by Minister Dion in early 2016,” Turp said. “I just hope that happens.”